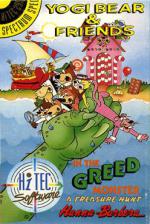 Despite the questionable biological implications of the title, this is a squeaky-clean collect-'em-up maze game. Trapped on the Greed Monster's island, you (as Yogi) must find 20 hidden coins, free all five of your kidnapped pals, uncover keys to open doors, and eventually track down the Greed Monster and pilfer his treasure. (That is, I think that's what you have to do - I haven't got any instructions, you see.) The baddies out to stop you follow set routes (instead of homing in on you) so some nifty footwork should see you through if you run out of ammo (ie stripey toffees). Collectable goodies give you extra toffees, energy, invulnerability etc and with the bright, flat colours and cute little characters it's like a twee entry in the Atic Atac genre.

But, alas, it's a bit of a disaster. Since the baddies don't attack you unless you get in their way you're left trundling about without any real sense of danger - the pace seems sedate going on sedative. The Explorer's Itch gets pretty quickly scratched, and overall the gameplay is as soggy as a papier-mache hat worn by an Amazonian in the rainy season.- Full marks to Hi-Tec for signing up some original licences, but minus several million for just pasting the characters onto soulless and repetitive games like this one. And out the window it goes.

Full marks to Hi-Tec for signing up some original licences, but minus several million for just pasting the characters onto soulless and repetitive games like this one.