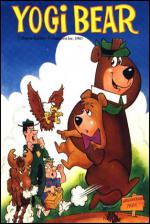 Poor old Yogi Bear! His life-long pal Boo-Boo has fallen into the clutches of a greedy hunter who intends to sell him to a circus.

Boo-Boo is locked in a cage on the far side of Jellystone National Park, and Yogi makes his way across the horizontally scrolling landscape to find his diminutive buddy.

In front of the cage are a series of stepping stones which have to be crossed in the right order to reach the key. If the wrong stone is stepped on, the hunter is alerted and Yogi gets captured as well, losing one of his five lives.

Boo-Boo has left a trail of toffee apples around the park, each one containing a part of the stepping stone sequence. If Yogi collects them all, he can safely release Boo-Boo.

Yogi wanders the park in search of the clues, avoiding snakes, frogs, vultures, irate campers and the park custodian, Ranger Smith. A touch from any of these reduces Yogi's energy, which shrinks towards a fatal zero. There are also rivers and holes which have to be avoided, or another life is lost.

A network of caves around the park is used to skip from one part of the landscape to another, but careful planning is required lest Yogi misses a Toffee apple. Yogi starts his journey on January 1st and has until the hibernating season to rescue his chum.

Piranha have consistently made good jobs of their licensed games, and Yogi Bear continues the trend. The gameplay tends towards the simplistic side, but is mildly addictive.

The graphics are great, and although the backdrops are a little gaudy, they capture the spirit of the cartoon nicely. Working out the correct route takes plenty of perseverence, and a little cartography is definitely required.

The novelty will doubtless wear off once Boo-Boo has been rescued, but if arcade adventures are your forte, Yogi Bear provides sufficient entertainment.

I was pleasantly surprised by the quality of the characters in Yogi Bear. Yogi himself is wonderfully drawn, although the animation is rather poor - especially when he jumps (don't blink or you'll miss it).

The landscape itself is very colourful and has a nice cartoon-quality feel to it. The game, however, is not terribly inspiring, being of a simple run and collect nature.

The precision needed to negotiate many of the hazards is annoying, and some of the campers are awfully difficult to shake off. Nevertheless, it is fun and mappers and explorers should enjoy what Yogi Bear has to offer.

Presentation 57%
A rather fiddly control method, and few options.

Hookability 64%
The precision needed to negotiate the first few obstacles is initially quite annoying, but thereafter forewarned is forearmed.

Lastability 51%
Jellystone Park is large and should provide a fair challenge - until completion.

Overall 61%
Not what you might expect from such a strong title, but a pleasant and playable arcade adventure.

Not what you might expect from such a strong title, but a pleasant and playable arcade adventure.