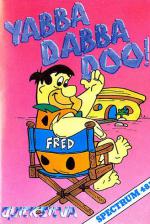 Fred Flintstone finds himself at the dawn of history, Before Bedrock. He is a bachelor, and you have to help him create his caveman's paradise so he can woo and win Wilma. At the beginning of the game, the landscape is barren but work is in progress... Bedrock is being built and Fred wants a home.

Fred begins on a plot of land littered with rocks and a sign saying 'home'. All the small rocks are useless and must be taken to the pit where they can stay out of harm's way. Picking up a rocklet at a time, Fred earns fifteen points when his heaves it into the pit marked 'tip'. When his building plot is empty, Fred can collect the larger rocks and drop them there sections of his house appear as if by magic, and two hundred points are added to the score for each large rock deposited.

There are, of course, several complications. Various prehistoric animals knock Fred over when they encounter him, while others nip his heels and pterodactyls drop rocks on his cranium. Fred's state of health is shown by two slabs of stone at the top of the screen, which are nibbled away by pecking birds. The first scale denotes Fred's energy level whenever he runs, energy is burnt up. When the scale reaches zero, Fred can't run any more and needs a rest or a meeting with Wilma to revitalise his flagging spirits. The second display shows the number of bites received from pterodactyls, turtles or dinosaurs, and indicates how much of the current life remains. Lives are displayed as tally marks below the two scales, and up to eight lives may be selected from the option screen at the start of the game.

The game is played against a backdrop of mountains. Fred can move left and right across screens which flip from one to the other. Bedrock consists of a number of streets running parallel to the mountains, and pressing up or down while Fred moves off a screen causes him to move one street closer to, or further away from, the mountain range.

Once the walls of his house are built, Fred needs to go to work in the quarry to earn money so he can hire a dinosaur to help with the roofing work. Once he's earned enough loot a dollar sign appears on the screen, and our prehistoric hero can nip to Dino Hire and lease his assistant. With the roof in place, the last task is the addition of a chimney, after which the house is complete and Fred can look for Wilma to try and encourage her to embark on holy matrimony.

Meetings with Wilma during the home-making stage boost Fred's enthusiasm for his work and Wilma's love for him shown by a beating red heart on the right of the screen. Each time Fred finds Wilma, he gains 1,500 points. The faster the heart is beating when the desirable residence is complete, the better Fred's chances are of persuading Wilma to join him.

While Fred is working away, his neighbours are busily constructing Bedrock a 5,000 point bonus can be collected by finishing before the rest of the town is built. In order to get about, and find those useful large rocks Fred could really do with a car. The good news is there's a car lurking somewhere in the game for Fred to use.

'Despite the lack of colour, the characters in the game are well drawn and reasonably well animated. The only exception to this is the car which makes Fred shrink every time he gets in. The game is very difficult as avoiding the various hazards requires no mean amount of dexterity. Having said that, I found it quite enjoyable to play once I'd got used to the controls. I wouldn't call Yabba Dabba Do a classic because apart from occasional humour in the way the cartoon has been adapted to the computer, there are too many repetitive provides a challenge and a bit of hot If you're a keen fan of the cartoon, you probably will find the game worthwhile'

'I had my doubts about whether the Flintstones series could be converted successfully to a computer game. I think I can safely say that Yabba Dabba Doo! is a great game: Taskset have kept the spirit of the Stone Age throughout surprisingly well. Within a short time I had really taken to this one, now I can't see myself putting it away for quite a while. The graphics are largish, jolly, detailed and all the characters are recognisable. The sound is fairly run-of-the-mill - a nice tune on the title screen, and a few burps and rasps here and there. The only niggle I have about this game is that it may be a little easy to complete, so it might not have much lasting appeal for good games players'

'I found Yabba Dabba Doofa very addictive game- playing it to the early hours of the morning. Although graphically I found it not too astounding (the animation of the creatures is not too hot, but they are very detailed), its shortcomings were made up by its sense of fun and user participation, with lovely features like driving the rock car and going to see a film at the drive-in. Building the house for Wilma before the rest of Bedrock is complete is vary hard to do, as the other people (I never really saw any) don't have to clear their sites. I felt a bit on my own in Bedrock with no other cavemen/women in sight, except Wilma. No Barney I m afraid to say. I was a bit disappointed by the lack of a full length Flintstone theme tune. I'm an avid viewer of the TV series, and will be an addicted player of the computer game for a long time to come.'

I'm an avid viewer of the TV series, and will be an addicted player of the computer game for a long time to come.