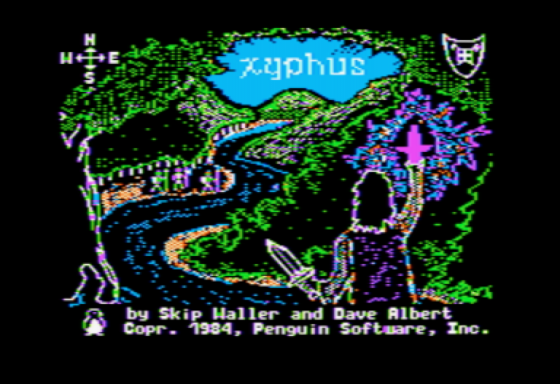 Having taken on the task of playing a character, you then have to keep him or her (or it) alive. That's where the fun comes in.

Xyphus was a demon lord who had his heart torn out of him 10,000 years ago by a mighty mage. He was "grievously wounded" as you might imagine, and pieces of his heart fell to the ground and formed Xiphoid Amulets which control all magic. The rest of the heart was hidden somewhere, apparently in the form of a gemstone the size of a human head.

The great conqueror Das (no relation to the modelling clay of the same name) has been unable to make any inroads into Arroya where the heart is hidden owing to the tribes of goblins and forces of demonic magic that hold sway there. This can only change when Xyphus is finally killed off.

Legend has it that a small band of wizardlings and warriors, no more than four strong, can slay Xyphus and open the lost continent. Oh well, look who drew the short straw once again...

Your band of four can be recruited from elves, humans or dwarves in any combination and each character can be either a fighter or a spellcaster. Creating characters in Xyphus is very simple - all you do is enter a name and choose a race and profession. Each race has different strengths and weaknesses, and while spellcasters can fight, fighters can't cast spells.

Like most similar games, your trusty band starts off with very little, though they do have some gold and are within a few moves of a trading post where all the necessary goods can be bought. The posts sell spells (very expensive), armour (must be purchased in a specific order) and weapons (varying prices and uses).

Extra gold has to be won by fighting the rather large variety of hostile inhabitants. There are 59 types of nasty listed (with illustrations) in the manual, not including the five different kinds of zombies. The manual hints that the list is not exhaustive, but I can't say I noticed any newcomers as they decimated my band time after time.

Like most good adventure games, you can save the game when you get to a good position or are just plain tired out. Saving in Xyphus is the easiest I've ever come across - pressing Q rapidly saves the current position to your game disc and then lets you continue or switch off.

The game does not access the disc during play unless you win through to another level or get killed off, in which case it reverts to your last saved position. On starting a night's playing the game also goes automatically to the saved position.

Making a player disc can be a little tedious if you only have a single drive, but with two drives it's very easy. Actual play takes a bit of getting used to unless you've played a lot of strategy board games.

Like many of these, the basic square isn't - it's a hexagon. This means that you can move east and west but not due north or south. The movement keys are conveniently set as T, Y, F, H, V and B. The G in the centre of this group of keys is used to signify standing still for one turn.

It's also possible to move the group as a whole, even if they aren't all in adjacent positions. however, dwarves tend to slow down group movement because they've only got little legs. Still, moving slowly as a party is sometimes better than waiting for dwarves to catch up.

Combat follows a bulldozer method - in order to fight you simply attempt to walk through someone or something. This has the advantage of not requiring another set of keys other than the movement ones.

The game looks a little better in colour, but it's perfectly playable on a monochrome set.

Like any game worth spending time on, Xyphus is a little difficult to begin with. Even if your party contains spellcasters, they need a Xiphoid Amulet. These are a bit scarce, wear out, and only one can be held at a time.

The manual suggests that if you win through, you could play again with fewer members in your party. Personally, I could have used an extra four because I've only fought my way to level 3. Only another three to go...

Good fantasy role playing games offer value for money because they last so long - longer than many arcade games costing the same price.

If you like them in general, then I can recommend Xyphus as a fine example of the genre. Be warned, though, you'll have to keep your oblate spheroids well hidden if you don't want them to be juggled with.

If you want a good fantasy role-playing game that lasts a long time, I can recommend Xyphus as a fine example of the genre.