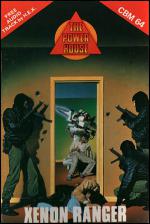 As any mere Ranger will tell you, to reach the grade of 'Xenon', is the ultimate aspiration of any copter pilot. This unusual combination of shoot-'em-up and platform game offers you the chance to earn that coveted title.

The screen is split in two - the two-way horizontally scrolling shoot-'em-up occupying the upper half with the platform scene below. These appear concurrently but are played as consecutive sections.

Beginning with the shooting match, you take control of a helicopter flying around an alien landscape. The aim is to collect energy packs, while dodging and destroying the alien choppers who fly about in hot pursuit. Having landed on a pack, it attaches itself to the rear of the chopper. You then fly back to the underground entrance, where the pack disappears and is noted on a counter at the top of the screen.

When two other packs have been collected, the entrance opens and you drop from the cop

I'm not quite sure what the programmer was aiming at when he first started programming this computer program, but the end result is a two-part mish-mash of rubbish.

The shoot-'em-up section lacks action and thrills, while the platform game is inept and frustrating due to the poor control method.

Without putting too fine a point on it, Xenon Ranger is unmitigated drivel - the designer should have his programming licence taken away.

The shoot-'em-up section is extremely basic and the graphics are infantile and gaudy. The platform part is reasonable enough, only suffering the slight handicap of being totally unplayable.

Oh yes... one other tiny flaw is that the main character is slow and virtually impossible to control. Don't even think about buying this.

I don't like this at all, and I'm annoyed that I've wasted my time playing it. In a way I have some sympathy for the program - it's unfortunate enough to be totally incapable of offering any soft of entertainment. Both sections are extremely dull.

Presentation 42%
Poor - no options and a bland title screen.

Graphics 25%
Extremely simple with ineffective use of colour.

Sound 29%
Adds nothing to the atmosphere or gameplay.

Lastability 20%
The first section is far too easy, and the second too hard. No impulse to return at all.

Value For Money 26%
There are far more worthwhile things to spend two quid on.

Without putting too fine a point on it, Xenon Ranger is unmitigated drivel.