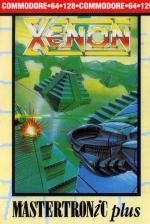 Amiga Xenon is, of course, the game which launched the Bitmap Bros cult, complete with a digitized bros pic to introduce the levels. There are four levels, all overhead-view, vertically-scrolling. A familiar enough concept complete with massive end-of-level monsters (and mid-level), power-up capsules plus numerous alien ships, tanks and gun emplacements. The one novelty is that by waggling the joystick your plane transforms into a tank, to trundle along on the floor beneath some enemy aircraft (On the C64 press 'space'.)

The setting for the game is massive alien destroyers which you're supposed to be flying over, and caterpillaring across. On the Amiga sharp, metallic graphics, combined with a pounding soundtrack helped make the game a big hit. Although it wasn't reviewed by Zzap, the belated C64 conversion was, earning 70% in Issue 50, Gordon claimed, "This would be a lot more fun if it didn't suffer from invisible bullet syndrome." Attractive backgrounds merged with same-coloured bullets to make it even tougher than a hard Amiga game.

On budget the 16-bit game is bound to be unmissable for Bitmap fans, but unfortunately it has dated. Gameplay and graphics lack variety, while slick presentation is taken for granted nowadays. Still, at this price it's well worth a look as a tough, professionally produced shoot-'em-up.

The C64 game is even tougher, with a hail of bullets and ships with a dull main craft leading to some confusion. Being sent back to the start of the level soon gets wearisome, while the tune is weak. Repetitive and unoriginal, it compares badly to Silkworm.

Repetitive and unoriginal, this compares badly to Silkworm.