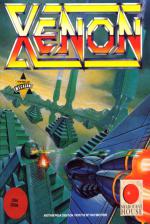 Life's a bitch sometimes. There you are, on your way home after seventeen months in the cosmos on clean-up duty, and what happens? The bad lads come round the corner.

Armed to the teeth they are, and obviously not out for a picnic, judging by the immense interstellar cruisers they're piloting. And there's yourself, all alone, in a feeble little one-seat AGAM (Air/Ground Attack Module).

The tea will be on at home, and you're going to miss Neighbours, but damn it, the fate of the world could be in dire jeopardy. So it's onto the blower, tell the missus to stick the food in the gammawave oven and the program on the videowall, and get into the thick of the action.

Xenon, if you haven't already guessed by now, is a space shoot 'em up. It's you against the might of the enemies' four massive star cruisers in a vertically scrolling all out battle to the death. Controlling a revolutionary new spacecraft, capable of switching to aircraft-to-ground vehicle at the wiggle of the joystick, the object of the game is to negotiate each of the enemy destroyers in turn, avoiding or annihilating the hazards placed strategically across the surface.

You're confronted by a variety of enemy craft, so don't think you're going to get an easy ride. Huge gun emplacements, placed in the most inconsiderate of places have been specially designed to spice things up.

And if you think that that's it, you'll be in for a shock when you come across the large enemy robot at each halfway stage *and* at the end of each level. Saving the world has never been harder, has it?

And your dinner's going to be all nasty and dried up. And you're going to get nagged off the wife, and...

This would be a lot more fun to play if it didn't suffer from invisible bullet syndrome. The backdrops are the same colour as the enemy firepower which results in lots of confusion and death on a pretty regular basis.

Graphically it's not too bad, with well-defined characters and backdrops, although everything is pretty repetitive, variety to some degree being sacrificed to difficulty. And it is *hard* - in fact I'd say that this version beats the hell out of the 16-bits in terms of toughness. Trouble is, it's this level of difficulty, together with the problem with the bullets, which ensures that Xenon's just pretty good rather than really brill.

Nine times out of ten, C64 conversions of Amiga software aren't the best games in the world. There are exceptions, and this is shown by the C64 version of Speedball (also originally by the Bitmap Brothers) reviewed in this issue.

Xenon, however, has to rank as one of the other nine. Not that I'd call this an outrageously poor conversion because as shoot-'em-up it's quite playable. Up to a point. That point being when bullets start becoming practically impossible to detect, and fly right up the proverbial khaki button at the most inopportune moments. And that is my only real gripe about Xenon - well, apart from the gaudy colours which play havoc with your eyeballs.

Not a bad little blaster but it could have been better.

Presentation 65%
Unimpressive title screen with scrolling level background. Once you've reached a level, you can keep restarting from it.

Graphics 60%
Although backdrops and sprites are elegant, they're marred by poor choice of colours and little variation.

Lastability 59%
It gets extremely tough. Lack of progress might put people off.

Extreme difficulty and obscure graphics stop a pretty good shoot-'em-up from being great.