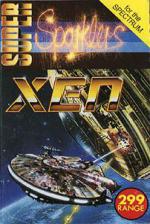 After a number of pretty average budget titles, Creative Sparks have come up with a pretty average budget shoot-'em-up called Xen. Apart from the fact that they've probably infringed someone else's copyright somewhere in the packaging of the game, there's not an awful lot to say about the game.

It's one of those games where you control the last surviving craft in the space fleet which defends your home planet, and it's up to you to save the world from the alien fleet. The aliens in this game are called Argons, and they've landed a number of ground installations gathered together in four sectors on the planet's surface. These installations are protected from the air by other alien craft, but you've still got to blast your way through and bomb the lot.

Using reviewer's shorthand I suppose that Xen could best be summed up as a budget Lightforce, unfortunately it isn't in the same league as the original. The prime requisite for any shoot-'em-up has to be the speed and responsiveness of control - a shoot-'em-up that plods along at a snail's pace is a waste of time, and while Xen isn't *that* slow it isn't really fast enough to build up much excitement. The graphics are all quite blocky, though there is some quite smooth scrolling and animation. There's nothing obviously wrong with Xen, but it's too average to stand out amongst the crowds of other similarly priced titles.

There's nothing obviously wrong with Xen, but it's too average to stand out amongst the crowds of other similarly priced titles.