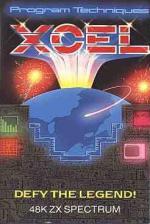 This game is so well put together it's hard to fault it - but some parts of Xcel are so frustrating to play that it almost put this reviewer off totally.

But if you are a thinking zapper, you'll take to Xcel like an alien to hyperspace.

The basic idea of the game is this. Computers called Sentinels are ruling the universe and mankind has become a completely servile race dominated by the machines. You have stolen a spacecraft from the Oceania Museum of Technology - and are embarking on a deadly mission to destroy the Sentinels who inhabit 30 planets dotted around the galaxy. Each Sentinel is protected by various mechanical nasties.

You have to hyperspace around the galaxy, visit planets, find the Sentinel installations and destroy them. Sounds easier than it is...

You have two shipboard computers, one which keeps you informed about the status of your craft, the other which tells you about the planets you have visited, a communications channel which you can call on for gameplay hints if you get into trouble, a hyperspace drive, a galactic chart and five attack shuttles which you use to make low level attack runs on the planets.

When you start the game, you get a view through the front screen of your ship with a planet spinning below. The screen is surrounded by icons representing the various functions described above. When the icon is flashing, your computer wants to tell you something.

To explore a planet you have to send a shuttle down to explore. Then the screen switches to a plan view - Dark Star-style - of the planet's surface.

You fly your craft through a series of obstacles - zapping them as you go. Then the first wave of Sentinel defenders appear, Zalaga-fashion, spiralling down at you dropping deadly bombs.

You have to fly your shuttle through a "maze" of trees - and sometimes there seems to be no way out! If you're short on shuttles then this could be the end of the game for you. This reviewer managed to get through on about the fourth or fifth attempt - after visiting a number of planets to see if they were any easier! Immensely frustrating!!!

The game features some really nice graphic gimmicks - like the "communications" which appear in "computerese" then get translated into English by your shipboard computer. And then there are the screen "wipes" which happen when you enter various stages of the game.

There's a useful help function which tells you just what all your controls can do for you and that communications link which gives game tips as you play. So many nice touches - shame about those trees.

Xcel is a really well presented game - one of the best on the shelves right now. If someone can tell us how to master the trees we'll give it a Blitz rating! Play it before purchasing.

Xcel is a really well presented game - one of the best on the shelves right now.