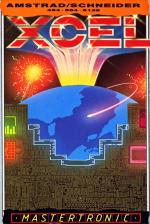 This is one of those games that you either love or hate - there's no middle ground for compromise. It's basically a two-stage shoot-'em-up, but with lots of frills that add to the enjoyment or frustration, depending how you look at it.

You control a spaceship trying to track down 30 planets among 300. On each planet you have to get through several defence zones before finding out whether there is a computer at the end of it. If there is no computer then you've wasted all your efforts and will have to go off and try somewhere else.

The screen initially shows you orbiting a planet, with a detailed control panel. From here, you can access seven other facilities that may give helpful information. There's one computer that tells you about all the other controls and a second that gives information on all the planets. "Status" gives you information on your shields and shooting accuracy, the map allows you to choose a planet to which you can hyperspace, and the communication option gives you any messages.

Many of these messages are translated from a weird alien scrawl. If you can decipher it (if it's possible) you're a better code-cracker than I.

When orbiting a planet you can send down a remote probe. You have only a limited number of these - when they're all gone, the game is over. Once down on the planet surface the probe has to go through a number of sections composed of two basic games.

The first stage is always a downward-scrolling screen - you can move your ship anywhere. It has to manoeuvre through narrow corridors of indestructible trees and blast away other objects from its path. The stages vary in design: some are almost like mazes and others require plenty of blasting. In places you need pixel-perfect accuracy with the ship - this is where you will either love or hate the game.

The second type is a simple old shoot-'em-up. Aliens whizz on from the top of the screen and circle around. If you can blast enough of them, it's on to another of the scrolling stages. Aliens shoot back and can be very dangerous. If you die, the next probe will have to start again from the first stage. If you reach the third stage and then die, you restart on stage three.

If you get through enough stages you discover whether a computer base was on the planet. Then it's on to the next planet in search of another one. The stages really are tough but with practice they can be mastered.

The required accuracy of control will drive you up the wall, but you'll always come back for more There are lots of lovely graphic effects - from the loading screen right down to the explosions. Should keep anyone happy for only £2.

Some very nice programming touches have been incorporated in Xcel. It is graphically stunning; even the sound effects are bearable. The gameplay lacks variety - basically it's down to the planet surface, blast a few aliens and return to your ship. It doesn't stop there, though, for you keep repeating this task. At under £2 though, there can be no doubt in my mind: this game's a winner.

Sensible choice of colours, all is visible.

Get through all of one planet's stages.