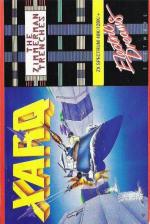 The planet Xarqon consists entirely of seas and oceans with no natural land masses at all. Many years ago the United Planets Co-operative set up a project known as the Sell Build Base. The object of this project was to build artificial land masses in the oceans of Xarqon in order to make the planet a profitable acquisition.

However, after thirty years of successful operation the land mass called Xarq has developed a serious fault. Why this has happened, no-one knows, but it has switched itself into automatic Cleansing Mode. Power in the Central Reactor is gradually being built up. As the levels get ominously high, the authorities realise the energy is being stored up in preparation for Planet Cleansing during which the whole of the surface of Xarqon will be burnt to a crisp and generally scoured to the core.

Naturally, the United Planets Co-operative is getting a bit panicky about this impending disaster, as over thirty years of construction and research hangs in the balance. If Xarq is successful in its spring cleaning campaign, the whole project will have to be started from scratch if there is any planet left to play with. You have been selected to stop Xarq destroying itself. Armed with an impressive array of weapons you begin to journey towards Xarq on a Nik Nik Hi-Speed Hydraboat...

The object of your mission is not an easy one. You must penetrate the Xarq complex so that you can actually drive your Hydraboat inside. This is possible only by accurate blasting of the lock gates, which results in the flooding of the Zimmerman Trenches located around the Central Reactor and allows you to use your Hydraboat. Once the trenches have been flooded you can begin to plan how you are going to destroy the reactor and stop the destruction of the planet.

Xarq is fully committed to the Cleansing Mode and is a bit miffed that someone is trying to thwart its efforts. All Security Defence systems have been fully operated, and Xarq itself does all it can to thwart your mission., Your Hydraboat has been equipped with a simple but effective laser which is ideal for blasting some of the smaller problems in the game, but for some of the more persistent nastier you may need to use your guided missiles or the mortars.

Depth charges have been supplied to help fend off marauding submarines which lurk in the murky depths waiting to attack from below. Submarines can be located by their distinctive bleeps on the sonar scanner.

A chart at the bottom of the screen keeps track of your status: damage to the hull, engines and protective shields is recorded on bar readouts, and the stock of weapons and fuel in the Hydraboat is also shown. The water depth bar is also handy. Naturally, your mission fails if status levels get too low.

The Hydraboat is capable of reaching great speeds and has been designed to be highly manoeuvrable. With one key you can select the direction in which you want to travel; then, by using the acceleration or deceleration key the desired speed can be achieved. Beacons are dotted around Xarq and can be recognised by their colour: blue and white beacons are pumping stations; green and black beacons are laser field generators while purple and black beacons reveal power fields, capable of generating currents of a million Tesla.

Small and detailed graphics, simplistic sound and a game that responds too well to your keypresses!