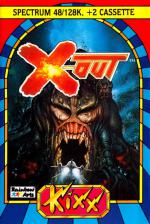 Imagine diving beneath the waves to find a whole, underwater city eh! I'd like to see the smug milkman in the t.v. advert deliver his rancid red tops then. Especially if it's the underwater city of X Out, with all its defence drones and firepower.

Programmed by Walsall based software development team Arc Development, X Out has the lot. You have a choice of three subs, which you then kit out with various weapons, including three way missiles, homing missiles, drones which can be sent ahead and the recalled and three types of super weapon - flaming hands, a fireball and a forward radiating shield of doom that takes out all the enemy subs, gun emplacements and everything else for that matter with one blast.

There are four levels of fast furious action; graphics are monochrome but are as clear and precise as a surgeon's whistle, but of course you can't blow one of these underwater. Which is a a bit of ruptured cod because, X Out really is something to blow your whistle about. X Out really is one of the Porsches of the budget scene - fast, furious and fun but unlike a Porsche, you can afford to buy it now and garage it lovingly with all your other collectors' classics.

Fast, furious, frantic fun with loads of sprites on screen at the same time and large end-of-level guardians. If you want finger-pumpin' action, then X Out is a great blaster from the past (er?).

Fast, furious, frantic fun with loads of sprites on screen at the same time and large end-of-level guardians.