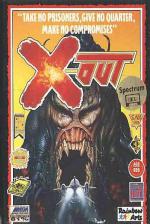 Well, let's get one thing out of the way to start with - this isn't as good a game as R-Type. It's got no colour, it's not as difficult, and you don't get as much feeling of real danger when you play it. But (but! but!) that's not to say it isn't an exceptionally good horizontally-scrolling shoot-'em-up, because it is! In fact, all round, it's a bit of a corker. Let's see why...

Well (ahem), actually, let's see why in a minute. First I'd better tell you what it's all about, starting with (groan) the scenario (don't worry, it won't take long). Here goes. "They came from deep space to infest our deep oceans." And, um, that's more or less it.

Basically, its your old 'all the worlds nations just about manage to cobble together one solitary space ship (or in this case, submarine) between them to go up against the bad guys, and you happen to be picked as the pilot' set-up. Except (except!) there isn't one sub at all, but oodles of them - it's just that you're only allowed to use them one at a time. (In other words, Rainbow Arts has cheated a bit in its scenario.) Still, there is a rather spiffing and incredibly comprehensive shop sequence in which you get to pick which basic craft you want, which weapons and drones you need, and which order you want to use them in (as each bites the sea-bed the next appears), so I can't complain. There's so much choice here (a large number of smaller ships or a few tougher ones etc) you could easily fiddle around with the configurations for hours. Marvellous!

The shop sequence aside, it's not the most original game ever, I have to admit. What Rainbow Arts seems to have done is take a fair smattering of the most popular and successful elements from recent shoot-'em-ups (R-Type-style snake things, four-way-scrolling play areas and so on), slot them all together quite neatly, get some pretty competent programmers to work on it (in this case Arc Developments, who did Fog Worlds) and Bob's your uncle. Or rather Cross-Outs your game (or 'Ex-Out' - there seems to be some dispute over how you pronounce the name), if you see what I mean.

Original it may not be, but play well it does. Everything's well drawn, fairly large and often nicely animated, with little crab creatures making little crab creature-type movements with their pincers, fish robots swishing their tails menacingly and the larger end- and middle-of-level monsters being particularly well designed. I 'specially liked the little mermen-riding sea snakes, who take refuge behind rocks when their mount gets zapped, and the giant oil platform-type fortification at the end of Level Two.

The only problem is that being in monochrome things often get very confusing. Stop firing your weapons and you soon realise that a good half of the bullets are your own and not the enemies' at all! The scrolling helps make things a bit less claustrophobic though. As well as left to right it moves up and down as you swing your little ship about, effectively doubling the size of the play area and giving you plenty of room to manoeuvre. While this does give some of the challenges the game presents you with a bit of a vague feel (instead of the tight, well-defined attack formations and problems faced in R-Type you get more spread-out and random-seeming waves of baddies) it also helps to open the game up a bit. Each of the eight levels feels fairly weighty and substantial because there's so much room to move.

So what are the minus points? Well, there aren't really that many at all (but just enough to conspire to rob it of Megagame status). The worst (and it isn't particularly a fault of this game - I felt a lot of others suffered from it too, including Fog Worlds) is that there's little real feeling of danger. You get hit so many times and lose energy in such little dribs and drabs that when you die you'd be hard pushed to notice why. I far prefer the R-Type 'one hit and you're dead' method. It's much more 'edge of the seat playable' (to coin a phrase).

Still, it's perhaps Rainbow Arts' best Spectrum product yet (and its games have been steadily improving lately) which bodes well for the future. As shoot-'em-ups go it's well worth checking out (in fact, it's halfway to being a bit of a classic). We liked it lots. Hurrah!

Smooth, large and well-implemented shoot-'em-up, with a great shop sequence and just enough originality to get by. Excellent.

Hurrah! A smooth, large and well-implemented shoot-'em-up, with a great shop sequence and just enough originality to get by. Excellent!