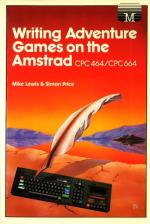 There can't be many people left in the universe with an Amstrad who don't have at least one book on how to write adventure games on it. But if there are any of you out there, or for anyone getting bored with their usual source of ideas, this book is well worth taking a look at.

It is a wide-ranging look at the subject which includes a general look at the current commercial scene as well as giving a host of hints and practical advice on writing your own games.

The book is divided into four sections: adventure games in general, the Adventure Kernal, implementing the Kernal on the Amstrad and an example scenario. The general section begins with a look at the history of adventure games (such as text, graphics, arcade adventure). It then goes on to discuss the principles of plotting, the structural elements and how to save space and make the most of your memory.

Section Two is devoted to a special idea of the authors; the Adventure Kernal System. They claim that this is a data-driven adventure games structure which enables you to change the adventure scenario data without needing any knowledge of programming and without having to modify the main driving routines. They have particularly avoided specific coding where each action or event is tied to a specific piece of code. Instead, they have worked on the basis of a number of modules with all the data stored as a series of DATA statements that can be changed to suit the writer's scenarios.

Section Three develops the idea more fully, with particular reference to the Amstrad machines and illustrates some valuable programming techniques and data structures.

The final part provides the listing and instructions for a working sample adventure program that you will be able to key in and play immediately. It is called Witch Hunt and, accompanied by some amusing illustrations and some good, clear explanations, it places you in medieval England trying to find out the identity of the local witch...

The book finishes with a useful Chexsum which is a way of helping you to check that you have typed in the listing accurately. Melbourne House usually feature these with their listings books and they certainly are a welcome aid for the fingersore keyboarder.

Overall, for £6.95 this book contains a lot and is pretty good value for money. If you are looking for something to help you get more from your Amstrad then this might be just the ticket.

If you are looking for something to help you get more from your Amstrad then this might be just the ticket.
Create Auction