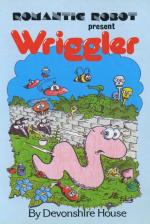 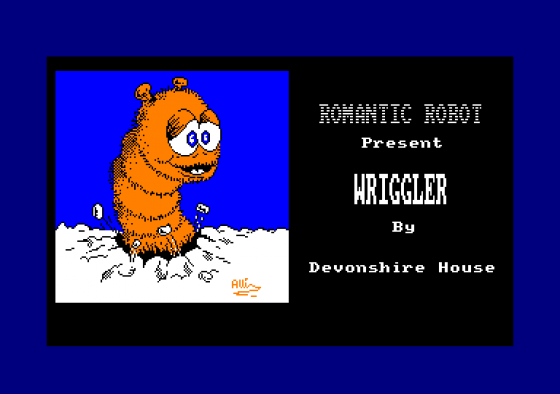 Despite looking more like a cute little caterpillar the wriggler of the title is a maggot. Fortunately he's a very cultured maggot who instead of the usual diet of rotting flesh much prefers the odd cup of tea or ice cream. He's taking part in the maggot marathon which hasn't been finished for thirty years. However it's less of a race and more of an exploration game.

This cutely-animated maggot has to find the route to the finish through 250 screens. These are split into six main areas, four of which need to be visited and two avoided like the galactic plague. All the areas are packed with nasty surprises for the unprepared maggot who will have to keep his wits about him to survive. A map might help as well.

The start is delightful as an ant fires a starting pistol to set you and another maggot on your way through the colourful screens. You don't have to wriggle after the other maggot though since it isn't in direct competition. The first hazard encountered is the ants, which sap your energy. 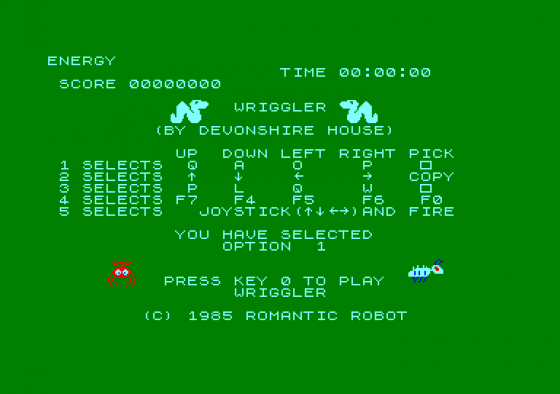 Ants behave in two main ways. One lot just follow horizontal movement patterns between two points while the others are much nastier and home in on you. Like all the creatures in the game, they sap your precious energy and if this drops too low poor wriggler literally falls apart as he turns first to a skeleton and then crumbles into dust.

Other hazards include red spiders who wander up and down screens and an evilly-animated white spider who creeps menacingly about. Large flies also bounce dangerously around some garden screens while in the aptly-named Hell and other underground sections, acid drops may threaten you.

Energy can be replaced with goodies that are found lying around in the form of cups of tea, bottles, ice cream and so on. These often can only be used when a good chunk of wriggler's energy has gone so that you can't accidentally waste them when he is strong. 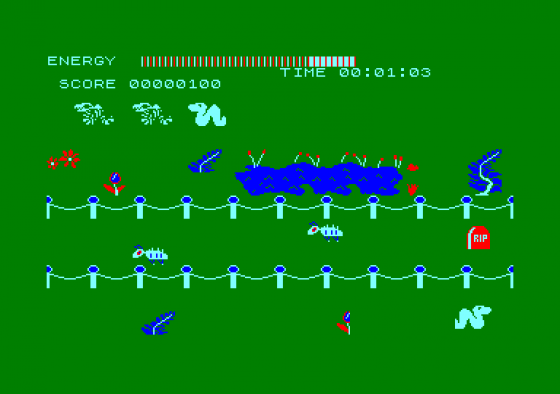 One of the nice features about the game is the change in gravity between certain areas. In garden and scrubland you can move all over the screen, but when you get into underground areas, gravity is imposed and the game takes on more of a platform game feel, although there is no jumping. In tese areas, a parachute may well come in handy. A parachuting maggot!

The game really needs mapping but as it sets up differently each time, this may put a real strain on your cartographic resources. The later stages of the game have more puzzling to do as you have to open sections with keys to try to get to the planet surface and perhaps an end to the race.

The graphics are undeniably cute and clever and there's some good design for the various areas. The title music and game jingles are good too, making a pleasing package to watch and listen to. The gameplay doesn't require much thinking about, but it should still provide plenty of lasting challenge.

Very cute and intermittently amusing, but a little slow for my taste. And there's no shooting. Graphics are clever and engaging, while the title tune is pretty impressive. But overall it's not incredibly demanding - it may appeal more to the younger player.

Very cute and intermittently amusing... Graphics are clever and engaging, while the title tune is pretty impressive. 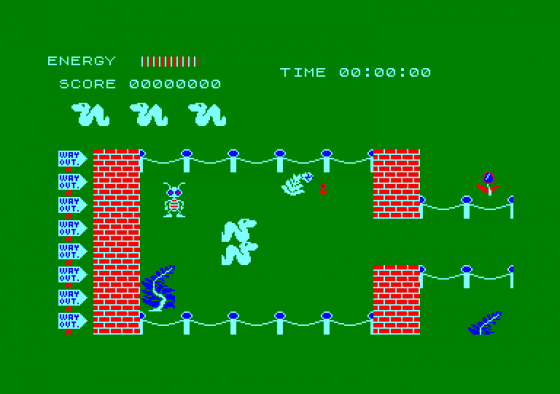