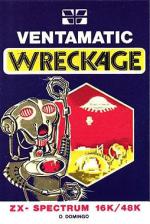 Another Spanish Ventamatic game from Unique. You are in control of a laser base protecting a city from the ravages of alien flying saucers that resemble angry jellyfish. They are dropping bombs all over the place, blowing craters in the ground, smashing up the roads, blasting the houses to bits and crumbling the domes - an all this under a hot blue summer sky.

Your laser base can be moved left and right for firing, while a vertical sight to the left of the screen affects the trajectory of the shot (which means they must be bullets or shells you're firing - don't lasers travel in straight fines)?

The more aliens you shoot away, the more they appear. When your city is destroyed the ground radiates lethally and the game is finished.

'This new game from the Spanish company is not their best. The loading screen is quite neat but that's about all. It has shades of Psytron (recognisable to the eyes of a trained CRASH reviewer!) in the respect that you have to defend a city with a laser cannon. But its nowhere near as graphically impressive as Psytron. The keyboard controls are quite good but this is marred by the fact that the fire button is in such an awkward position. The graphics are quite neat and while they serve their purpose, that is all they do - no hidden extras; and the sound is quite boring, especially with the continuous, wearing buzz when you've finished a game that goes on until you start a new one. This is a very simple game and it begins to get tedious after a while. It may well appeal to younger children though.'

'Wreckage is rather too simple in content to warrant more than a few moments playing, which is a pity for the very bright and rather original graphics. I found keyboard control irritating as you cannot fire and move at the same time, not even the sights can be moved left and up at the same time. This gives the aliens a sizeable advantage. Again, it's one of those games that would have been great a year ago but looks, or rather feels, outdated now.'

One of those games that would have been great a year ago but looks, or rather feels, outdated now.