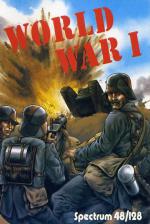 We hated this game at first, but after playing it for a while quite enjoyed it. The main trouble is that the instruction sheet is mingy and parts of it are totally incorrect. There are lots of mistakes in the table of control keys for example, so redefine the Keys before playing.

The game is a contest at 'strategic' (large-scale) and 'tactical' (small-scale) levels. That's not the real difference between strategy and tactics, but never mind! You play against the computer, commanding either the Central powers (Germany and her allies) or the Entente powers (Britain, France and their allies) or two people take once each side. You each have your own end of the keyboard and both play at the same time. Each player's map scrolls independently, and both maps are on the screen at once, so you each see the others map and find out what they're up to. With computer play, you have only your own map. A panel shows your unit strengths, morale, ammo and so on but, as the fight is fast and furious and so much depends on keeping your eyes on the maps, these figures don't help you much. A small-scale map of the whole area can be displayed in case you get lost.

Your main activity is to rush the cursor around your map, ordering your units to move or fire. This is easy to do, provided that your are nimble on the keys. The units then move and fire of their own accord until they are eliminated or have exhausted their ammo. Just keep them all at it, if you want to win! Units (which include naval units) differ in fighting capabilities and their movement options depend on terrain. So there is a certain amount of tactical interest in the game, but the pace is such that you do not have that much time to think about it.

At certain times during the strategic level play, the message 'Battle Stations!' appears and you are taken to the tactical game. The units are deployed in a semi-random way and the whole thing begins again, though it's now on a smaller scale. There's no resemblance to any historical World War 1 battle. In fact, the game has none of the atmosphere of trenches, mud and attrition, so it's definitely not a game for the purist. As a wargame, it's like playing on the floor with toy soldiers and a few cannons that shoot match-sticks. If that's what you like, you'll find this game really good fun.

As a wargame, it's like playing on the floor with toy soldiers and a few cannons that shoot match-sticks. If that's what you like, you'll find this game really good fun.