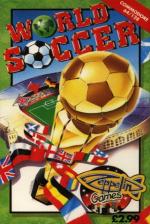 Guess what, Brian, it's another of them football manager doobries, and a bugged one at that! You get to manage any of the teams in the 'world soccer league' - including such famous names as 'Hamiton' and 'Suttgart'! - and inevitably inherit a side of total no-hopers.

The first thing to do is to pick your first eleven plus a couple of subs for the match. Irritatingly, the list of players (with position, age, fitness, speed and agility attributes) is divided up into three separate screens for defence, midfield and attack - so you have to keep flicking through them repeatedly to select the team.

Select the whistle on the attractive icon-driven menu screen and you can play your first match. For some reason, as manager, you aren't actually at the match and can only watch half and full time highlights on Zep TV. A commentary scrolls up, consisting of about a dozen predictable phrases - to describe a goal or a near miss - along with the time of occurrence. To add to the excitement you even get the option to put on your subs - but only at half time!

At the end of the game you get the totally unpredictable final result. I say 'unpredictable' because the programmer is obviously innumerate as the final score often bears no resemblance to what happened during the match - once, I was losing 1-0 at half time, and ended up winning 3-0!! In addition, penalties seem to count *against* the team that scored them!

After losing 6-0 you may want to sell a few dud players and buy some better ones. Your scout, who looks suspiciously like Bobby Robson, looks out for the best players on the market, and invariably comes up with some old codger with the speed and skill of a paraplegic tortoise - it is Bobby Robson!

Also on the menu screen are the bank manager (although there are never any decent players to spend a loan on) and the medic (for some reason the players are particularly susceptible to groin strains).

So there you have it: a simplistic but fairly playable footy management game almost totally ruined by some incredible bugs. It just isn't football, Brian.