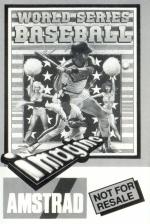 Don't be put off by the American-sounding title of this game - all it is is good old rounders with a few rule changes. It's the biggest spectator sport in America and this version certainly has an enthusiastic crowd and, with two players, a really competitive atmosphere.

The action all takes place on one screen, a 3D representation of a ball park, although it has a video screen within it for showing the close-up action. The field has a diamond in it with a base at each of the four corners. A pitcher stands in the middle and throws the ball at the batter standing over the 'home plate' or 'fourth base'. The idea is for the batter to hit the ball and get around the diamond back to home plate to score a run.

Each team has nine innings in which to score as many runs as possible, each innings lasting until three players are out. You can be out in a number of ways. If the ball is caught without bouncing then the player is out. He's also out if he's tagged by a player carrying the ball, fails to reach first base before the ball does or has three 'strikes' against him. A strike is when the batter misses a ball (although some he can leave if they are too high or too low as they will be illegal). If the pitcher pitches four illegal balls to one batter, he automatically goes to first base.

The players can move round the diamond one base at a time on separate hits. If a batter hits the ball out of the playing area it's a home run and all the batters run in to score. The fielders can chase and pass any balls that are hit in their direction although you may find the computer's selection of which fielder you control a little odd at times.

The giant video screen on the field provides a close-up of the action as the pitcher delivers the ball and the batter swings at it. The pitcher has a variety of different pitches including fast, slow, high and low balls and combinations of them. The batter also has the option of three speeds of swing - fast, medium and slow. With a fast swing, he may get a home run but the timing isn't always easy.

Once three men are out, the teams swap roles, interrupted only by the cheerleaders and a kid with a "Hi mom" sign after certain innings. If the scores are tied after nine innings, extra ones are played until a clear winner emerges. The computer plays a tough game until you work out his tactics, whereupon you can slaughter him. Therefore, it's best to play against another person since it provides much more unpredictability and excitement.

I'm not a baseball fan, but I was quite prepared to enjoy this computer version. However, I didn't really get to first base with this program. The graphics were disappointingly chunky, with the players' heads seeming to consist of little more than baseball caps. It's easy to thrash the computer after a while and although the two-player option can be exciting, there's too much inconsistency in where the ball ends up to make a genuinely satisfying contest.

N. Player graphics are a bit chunky.
N. Ball occasionally appears to get left behind when it's actually been picked up by a fielder.
N. The computer is fairly easy to beat.

It's easy to thrash the computer after a while and, although the two-player option can be exciting, there's too much inconsistency in where the ball ends up to make a genuinely satisfying contest.