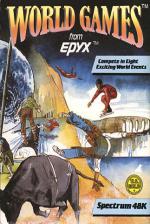 What can match the international flavour of US Gold's latest festival of fun and frolic, World Games? Marcus Berkmann spins the globe and gets his fingers stuck.

We are the world, we are the children, as those great modern philosophers Lionel Richie and Michael Jackson once wrote. This spirit of global oneness (hey man!) is what World Games is all about. After Summer Games and Winter Games, Epyx's latest sports sim collection (through US Gold) travels the globe in search of the wildest and wackiest athletic contests imaginable. From the Soviet Union (Weightlifting) to the United States (Bull Riding), you'll hop the oceans to compete in eight events with nary a hint of jet lag. No hotel bills, either. And you may even wind up as world champion in an event or two.

As you'd expect, the game's a multi-loader, and the initial menu gives you a number of options. Being impatient, I always tend to go for the 'Compete in all events' choice, but it's worth putting in a little effort on the practice mode in some of the events. Alternatively, you can compete in just the one event - especially useful for showing off to gullible friends. In fact, you can play with up to three other people, but personally I like to have a little quiet practice before I start clustering the competitors - I mean, you wouldn't want to lose, would you?

World Games is well up to Epyx's previous standards, and makes me realise how long it is since we've had one of these games compendiums to juggle with. Each event has been well designed, both in gameplay and graphics, and you'll be relieved to hear that there's not too much of the old waggle waggle - most of the time you need brainpower as well! So pack your liniment, collect your passport and call Aeroflot, 'cos the first stop's Russia - and you're pumping iron!

Home of those vast blubbery men called Zbigniew Lardslabflabinsky, who always come first in the megaheavyweight class at the Olympics. But you know what the say - the bigger they are, the harder they fall, and this is your chance to grab weightlifting gold - even if you were a finalist for Mr Puniverse! There are two rounds, the "snatch" and "clean and jerk", and in competition you'll need to complete the first to move on to the second. The snatch is all a matter of timing - grasping, lifting, snatching and standing all within a couple of seconds. And don't leave him lifting the bar too long, or he'll crash through the floor? The Clean and Jerk is even trickier - lift it clean or you'll look a jerk.

A brisk flight over the Urals, and we're in the land of lederhosen, monocles and "Tomorrow Belongs To Me". Here we try the 300-year-old sport of barrel jumping, in which Teutonic Torvills and Deans attempt to clear a number of barrels on their ice-skates. Not the easiest sport in real life, I'd guess, but World Games gives you the chance to trounce those klose-kropped Kurts and Karls. It's a joystick waggler, of course, and by no means a piece of Apfeltorte. Press fire to jump, and pull back to land, if of course you actually manage to get over the barrels. If you foul up, expect to get wet. Just the sort of game to break the ice at parties. Vorsprung durch Technik, mein Fuhrer!

Are there any famous Canadians? (Besides Captain Kirk, of course.) Never mind. Our next stop is a Canadian lumber camp, where lumberjacks have been rolling logs since 1840, and pressing wild flowers for even longer. You compete against another player or the computer, and the idea is to dislodge your opponent from the log by spinning it back and forth. You need to establish a rhythm with the lumberjack's legs [Nawty! - Ed] if you're to have any chance of success. When, inevitably, you fall in, you certainly pay the penalty - a shark starts circling you and soon you don't have a leg to stand on. Try changing the log's direction suddenly and then rolling it in the direction that'll make him fall off.

Hey, Mary Lou-Beth-Jim-Bob, this time we don't have to flah (translation: fly) thousands of mahls 'cos we're right here on the do'step fo' this one. Iss jus' down from Canada fo' the Bull Ridin' - a favourite sport here in Dallas. This Bull Ridin' nonsense's real hard to git the hang of. You got to control the bull when the critter's buckin', when he's spinnin' an' when he's runnin' an' haltin'. Not only that, you must try and anticipate the bull's moves and respond accordingly. Here's one round of World Game, where practice isn't just useful, it's vital. Fortunately the practice mode lets another player control the bull, giving you the opportunity to get used to his churlish and bad tempered ways.

?Que? A we're off again, to Mehhhhico (stand back, or buy an umbrella) to watch Cliff Diving in Acapulco. Sounds like a fifties Hollywood film star, dunnit (...starring Tab Hunter, Rip Torn and Cliff Diving), but no, it's one of the more glam and unusual sports in World Games. Unlike barrel jumping, it's easy to got going without being repeatedly killed, but perfecting your art is a mysterious process requiring years of practice and some nifty stickwork. Avoid being dashed against the rocks by arching your back for as long as possible, then surface quickly to escape that watery grave. Cliff himself is an elegant individual, although I'm not sure I recognise Acapulco from the last time I was there (ahem).

Och, we do get around in this game, don't we? Don your kilt, speckle yer sporran and prepare to get tossin', 'cos we're in the highlands and the wind's whistling around sour Firth of Forth. Your mission, should you decide to accept it, is to launch yon caber into the gloaming as far as your hairy arms (bleugh) can chuck it. This is no mean feat. Fail to launch it properly and you'll be jumping up and down, nursing a no doubt fatal foot wound. If you don't get up enough speed before bunging the thing, you'll throw it straight up into the air and it'll pummel you into the ground. The caber has to flip over completely for a legal toss, and you'll probably flip before you get that far.

Haaaiiiieee! Thwok! Yes, our final port of call is Japan, and in more ways than one, we've corns full circle - yup, its the fat men again! And this is Lard with a capital L! Sumo wrestlers don't stop at two dinners - life for them is just one long meal. Here you can play against the computer or another player, pushing your opponent to the back of the mat or chucking him over your shoulder - something you'd need more than a cooked breakfast to do in real life. The moves are fairly standard judo aim - loads of tripping and wacky Jap words that sound like people sneezing. The quicker your reactions, the shorter the match and the higher your score. Aiiiieeee! Splat!

The quicker your reactions, the shorter the match and the higher your score.