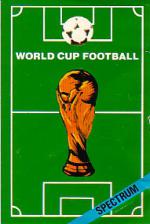 Bobby Robson has no need to worry about the standard of football in this game. I don't think that these players pose much of a threat to England's chances in their next game.

This is the first attempt at an arcade version of football on the Spectrum. We've had games like the excellent World Cup Manager from Addictive Games, but that was mostly about typing names and numbers into the computer. There was also some real action in the game, but it only served to highlight the choices you made.

Now Artic has brought out a full arcade football game. It's a simulation of the World Cup. You can start with anything from one to nine teams and, through the process of semi finals and elimination matches, one will eventually emerge as champion of the world.

You start by selecting how many teams you want. You then choose them from a list of 40. Everyone from Argentina to Zambia is in there, including England, Eire, Scotland, Wales, America and Russia. Careful selection of countries can result in some very interesting matches.

Once you've selected the teams then it's time for the first match. The game is for one or two players, so you can either play with a friend or against the computer. The players are controlled with either a joystick or the keyboard and both the Kempston and Sinclair joysticks will work.

The game starts with the two teams trooping on to the pitch. There are only five players in each team, which isn't very realistic, but the screen is less crowded.

The whistle blows and we're off. I was using the keyboard for control and found the teams easy enough to control. You have control of the member of your team who is nearest to the ball. He turns a strange shade of blue when under your control, so that you know where you are. The only problem I found is that you suddenly lose control of your player if another member of your team becomes closer to the ball.

Once you're used to this, you can get down to some serious football. The game is split into two halves and a clock at the top of the screen tells you how much time remains.

Once the game is over, it's time for the next match and the computer updates a scoreboard automatically.

The graphics are better than many I've seen in this type of game. The movement works quite well, with the players moving their legs realistically as they run. They even slow down as they approach where they happen to be running to.

If you like football, then you'll probably enjoy this game. It's a good way to spend a rainy afternoon, especially if you've got a friend to play against.

If you're not a football fan, though, then this is not the best way to get into the game.

If you like football, then you'll probably enjoy this game. It's a good way to spend a rainy afternoon, especially if you've got a friend to play against.