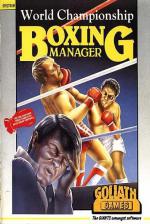 Yur, yur, 'e's a good boy, 'e's bin trainin' 'ard, 'e's up to 'is fightin' weight, I fink 'e'll take 'im in the sevenf, 'an like that World Championship Boxing Manager is so realistic you can almost smell the sweaty jockstraps - the only option you don't have is to shoot your manager, fnarr fnarr.

As you'd expect, there are a lot of similarities between WCBM and a footie management game; you pick your lads, train them, go out to arrange matches, keep an eye on the performances of other managers and boxers, and try to get your boys to the top of the league, or in this case, the two controlling boards of boxing, The Federation of World Boxing (FWB) and the World Council of International Boxing (WCIB), who each operate by slightly different rules.

The program's fairly heavily textual, though there are some reasonable (if static) graphics. Most of your decisions are made using a pointer-controlled menu system; from your office, you can consult the contents of your filing cabinet (contracts, fight records and rankings), your filofax (boxers' records, fight diary and notes); you can make phone calls to other managers to try to arrange fights with suitably experienced boxers, to consult the regulatory boards for permission to go ahead, and to send your scouts to keep an eye on rival boxers. You can also control the date by advancing the calendar, check your mail for news of fight fixtures, and choose to leave the office.

Once outside the office you have another selection of options; you can enter the Physio's office to check the health of your stable of up to five boxers; you can go to the training room to specify a regime of different training routines for your lads; and you can exit the building to watch a fight. Don't make the mistake of choosing lo sit through a fight which doesn't involve your boxers; all you get is a sort of ticker-tape display saying "A hit B, B ducks, B hits A", which goes on for ever and ever and ever. Pity there isn't an option to skip through this. In fact, it's almost as slow and boring if one of your lads is fighting, but at least then you get to choose different tactics - fight close, defensive, dirty, and so on, and you get a bar-graph display showing factors such as stamina, alertness and bruising.

Not many people know as much about the strategies and tactics of boxing as they do about those of football; and, since there's no arcade element to WCBM at all, strategy is what it's all about. You'll soon learn to encourage your boxers to fight in a particular style, to match them with suitable opponents and to train them to win. This is a worthy follow-up to the well-received Tracksuit Manager, and whether or not you're interested in the noble art, you should enjoy having a bash at it.

A worthy follow-up to the well-received Tracksuit Manager, and whether or not you're interested in the noble art, you should enjoy having a bash at it.