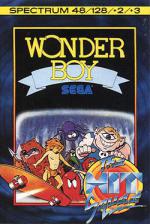 The Wonder Boy Sega saga hits the small screen second time around in this latest addition to the Hit Squad label. Wonderboy must journey through seven territories each made up off four lands with four distinct areas. The reason? True girlie love. Yes, he's out to rescue his girlfriend Tina from the greasy clutches of the evil King.

And how does he do that you may well ask? Well, being blessed with the intelligence of the average stuffed beaver, he must rely upon his leaping ability to avoid killer frogs, bees and snakes. Along the way, refreshment is also provided by collecting the odd bit of exotic fruit or less than exotic MacBeefy's junk food, all of which help to keep his vitality up (fnak!) Once his vitality is spent (fnar) Wonder Boy is wasted and, being anything but wonderful, is worm fodder.

Wonder Boy's various enemies are best either dispatched or avoided - you can leap over them or use the alternative, and far more enjoyable route of smacking them around the head with a stone axe.

Each time Wonder Boy starts, whether from the start or after a nasty death, he must collect a weapon by jumping on an egg. Sounds a bit girlie does it? Well old WB's no Easter bunny 'cos inside the eggs are a stone axe, a skateboard which acts as a super speed up or... well... okay, so in one egg there's a fairy an it's more than a wee bit woofty but the good fairy (yeeeuck!) does give of WB protection from all the nasties for a space of time.

So, as old shortstuff scrolls his slightly Jerky way from left to right, he must avoid all the killer boulders, bonfires and bees not to mention (so why mention it? - Jim) snakes and the odd killer frog.

All told, Wonder Boy is okay. It's obviously the pre-runner of the later, (and much greater) Wonder Boy II (which was an added board to the original arcade game) and Super Wonder Boy in Monsterland, both of which have the added depth of bigger worlds and shops to buy weapons, potions and the like. Wonder Boy was good. But nowadays, it's not that good!

The old Sega coin-op returns not with a bang but with an echo of the original.

Ok, on first release Wonder Boy was good. But nowadays, it's not that good.