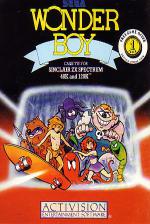 Wonder Boy's minuscule heart-throb Tina is kidnapped by the evil King. What can a boy do but rescue this distressed damsel?

But should Wonder Boy lay a chubby cherubic limb upon an advancing mollusc, a killer frog or stumbling midget mannequin, then he shuffles one of his four mortal coils.

To help him in his unwholesome quest, Wonder Boy can gather helpful items by making like an omelette chef and cracking open the large eggs that occasionally lie upon his path. From these, useful objects such as skateboards, temporarily protective fairies and stone axes appear. The axes can lay low troublesome beasts, and earn Wonder Boy points.

But even Wonder Boy needs food, and so our little diapered dynamo collects nourishment by touching the carrots, apples and fruit bunches he finds upon the way. His vitality is replenished when he gets through a land, anyway.

When the last land of a territory is reached, a deranged ogre must be defeated before Wonder Boy can go on to the next territory and come a little closer to planting a kiss upon his treasured girl.

There is a two-player option.

'Wonder Boy is quite playable, but technically uninspiring. The scrolling is awful, and the tune, good at first, goes from bearable to boring to very annoying; it doesn't keep to a regular rhythm, but slows down noticeably when the screen scrolls. And the dull screens need colour. Disappointing, and poor value.'

'The game itself, similar to Super Mario Brothers isn't bad - but the implementation is unprofessional and doesn't match recent Activision products. The action on the monochrome display can become confusing - the character outlines aren't bold enough to distinguish them from the background. Add to that the jerky character-scrolling, and you've got a product that won't excite anyone.'

'Let's face it: the arcade game was pretty, but extremely tedious. And the cuteness has been lost in the transition to the merely monochrome Spectrum screen. The character-scrolling is jerky and the collision-detection is inaccurate: both mistakes could have been avoided. But despite the bad structure I found the concept of Wonder Boy fairly addictive, and the two-player option is competitive. It could have been good, but Wonder Boy is a sternutatory game.'

Fairly addictive, and the two-player option is competitive.