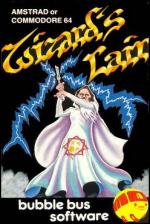 The game is essentially an arcade adventure with a bit of shoot-anything-that-moves thrown in for good measure. Pothole Pete, intrepid explorer extraordinaire, was out on a subterranean stroll when he stumbled across the legendary Wizard's Lair (hence the title). Pete knew of the legend (probably read the instructions as well) but was foolish enough not to take its warning seriously. Which explains why he's in the predicament he's in now.

The Legend of the Cave (as relayed by the cassette inlay):

'Tis a legend told long ago,
About dark caves far down below,
Where deep within a Wizard dwells,
Bespaking doom and casting spells.
If this lair thou dost uncover,
Four pieces of lion thou must discover,
Only then may you escape.
Past the lion that guards the gate.
So heed this warning and beware,
Never venture into 'Wizard's Lair'.'

The search for the four pieces of the amulet, sorry Golden Lion, takes place deep inside a massive 256-screen network of underground caves, rooms and passages, complete with all the objects and nasty creatures one would expect to find in such a dire and foreboding place. Most of the objects can be taken to aid Pete in his quest, but there are a couple of exceptions - one or two things have a rather terminal effect when picked up!

You start the game with five lives and a limited amount of weaponry. Each life has a continually depleting energy supply, and should this run out then a life will be lost. Both energy and lives can be replenished though - energy through picking up any food found around the cavern, and lives from glowing chalices. Other useful objects are wings that temporarily speed you up (winged feet?), bits of armour for limited protection, crosses to enable you to pass through certain barriers, and weapons to increase your weaponry. Rings, diamond keys and spells also lie about the place for the taking, the last two being of considerable importance...

Certain doors in the cave can only be passed through when in possession of a key. Each time You go through a door a key is used up, so you have to choose your exits carefully - it's very easy to get 'locked in' a few rooms when your keys run out! Further keys, though, can be picked up in the cave or obtained via magic in the form of spells.

The latter can only be used if you have some form of gold (chests, crowns, coins and bars), since the spell draws its power from the precious metal. The gold can be turned into either keys, rings, diamonds, extra energy or weaponry, the quantity of which depending upon how much gold you have managed to amass.

The locations are displayed in the same manner as Atic Atac, ie a perspective plan view, and are all different, being composed of rock, stone, flora, fauna and even rivers and streams! Unlike the Ultimate game though, the main character, Pete, is also viewed from 'above', giving an effective overhead look. On moving from one location to another the screens 'flick', as opposed to scroll, and many nasties appear very quickly thereafter. Most of the doors separating the locations open and close frequently, which means you have to time your exit well. There are even secret passages to be found!

The 256 rooms of the lair are spread over seven levels and each can be accessed by elevator in one of two ways. The first is the Wardrobe Lift, which simply takes you up from one level to the next. The other is the Magic Lift, whereby if you type in the name of the level you wish to go to, you will be magically transported there. Very handy.

As Pete knew there were such a variety of monsters in the lair, he took the initiative to bring some axes and the like with him. Any creature that gets in the way can be disposed of with a carefully, or even recklessly, aimed shot. Bear in mind you have a limited quantity of ammunition though! There are two particular nasties (Knights and Executioners) that kill Pete on contact (others merely drain him of energy) and therefore they must be disposed of on sight.

On losing all of your lives you are given a message and a chance to 'etch your initials into the legend's cave' (the high score table), previous scores permitting, of course. You are also told what percentage of the 'adventure' you have completed and how many pieces of the Golden Lion you managed to recover.

Bubble Bus have brought a genre of game to the Commodore that it really missed out on. Wizard's Lair is an adventure in the age-old Ultimate style, drawing a lot of its elements from the aforementioned company's Atic Atac. The scope of the game is enormous and at first can be a bit overwhelming, as it's hard to decide where to start. When playing you have to be constantly moving, or more energy-sapping creatures appear. This can get a bit hectic, especially when you run in to another room and bash head first into a Knight or Executioner.

The Wardrobe and Magic Lifts are a great idea, though the transportation time between floors is a little long. Even if you've had a lot of previous experience playing similar Spectrum games, you'll find that Wizard's Lair will pose problems to even the most hardened arcade adventurer. All in all, a very good game with some very effective graphic and gameplay features. Definitely one of the best of its type on the Commodore.

This is undoubtedly a game that owes a lot to the likes of Ultimate's Atic Atac and Sabre Wulf. Not only is it similar in appearance but in certain gameplay elements. This is by no means a bad thing since there has only been one other game of this genre available on the C64, namely Micromania's Swag.

The graphics are crisp and colourful - most of the locations are drawn up quickly and efficiently on screen and the single colour sprites work surprisingly well. The sound is also very good with some nice pieces of music and some unusual effects, adding to the excellent presentation and overall feel of the game. Although unoriginal (but then who gives a damn about a program not being original, anyway?), this is a great little game that is fast, furious and above all, fun to play.

Wizard's Lair takes the general game format from Atic Atac, improves the graphics, sound and gameplay and comes up with one of the best adventure/shoot-'em-ups I've seen in a long while. From the word go the game is frantic - everything moves so fast that it requires excellent reflexes and swiftness of hand and mind to stay alive.

There's plenty of scope for those with cartographic leanings, since the game has seven levels with plenty of rooms on each. The whole thing is very nice to look at, the graphics working very well with some superb, atmospheric sound effects and jingles. A really excellent game which should appeal to both adventurers and blasters alike.

Hookability 89%
Instantly appealing, fun to explore and especially to map.

Lastability 88%
Even with a map it will take time to recover the four pieces of lion from the 256 screens of hardened arcade action.

Value For Money 86%
Cheaper and better than most games of this genre.

Overall 89%
One of the few really good arcade adventures on the C64.

One of the few really good arcade adventures on the C64. Instantly appealing, fun to explore and especially to map.