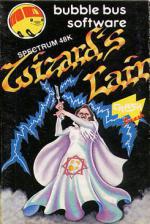 This new game from Bubble Bus is an Atic Atac look-alike. However, instead of being trapped in a haunted mansion looking for the right keys to let you out, you are searching underground caverns for parts of the golden lion, the key to your escape.

The game is turbo-loaded and apart from an initial problem which was resolved by experimenting with the volume control, is quick and trouble-free. Following a colourful title screen an option page is displayed. On this you have the choice of Kempston or Sinclair 2 joysticks, keyboard control or user defined keys.

Playing the game is a fast and furious experience as you guide Pothole Pete around a vast subterranean maze of caves, rooms and passages. In the various areas of the maze there are treasures to be collected, articles of food to help your strength levels and extra weapons to aid you in your fight against the dozens of nasties you encounter.

In some rooms there are magic spells. If you collect one of these it is only utilised if you have some gold. You then have a choice of more treasure or extra strength or weapons. The graphics in the game 'are well done, although very similar to its predecessor. In all this would seem to be a case of looking at a good game and re-writing it with the rough edges smoothed off to make an even better game.

The graphics are well done, although very similar to its predecessor.