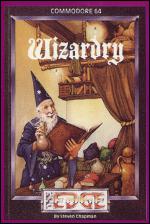 Many games have tried to capture that special atmosphere of the classic role playing game Dungeons and Dragons but to date they have all fallen short. Wizardry is the closest yet.

The game casts you as a sorcerer's appentice who must seek out the prime element in a city of illusion and zap it with a single spell. Unfortunately, this is going to be harder than it first seems for first you must solve countless areas of a castle with the doorway to the next area guarded by a particularly heavy monster. For example, the guardian in the first area is a Minotaur who will quite happily smack you if you even approach it, despite your trusty sword!

The correct way is to kill it with the right spell. However, this is well hidden and is only revealed after an exhausting sequence of monster-bashing and spell-finding.

The spells are usually hidden in chests in the centre of the impressive scrolling 3D rooms but are guarded by monsters. These you can either fight with your sword (by waggling the joystick) or by firing one of your depleting stock of fireballs. Both the sword and fireballs are just two items in a scrolling menu of otions that can be selected from your pool of spells which also includes the vital HEAL and TELLTALE spells.

HEAL is self-explanatory and restores your energy and hit points which can be lost during combat but you should use it wisely as each spell can only be ued once. Luckily you have a stock of Fireballs, Heal and Telltale spells but if used unwisely you will soon run out.

The TELLTALE is the game version of a help command which produces a pair of mouthing lips above our hero but more importantly a clue in a window below the room display. These give you much needed pointers in an otherwise bewildering game. Indeed, those sporting people at The Edge have even included a crib sheet that will guide you through the first area but it still requires some time to complete it - even with his help.

The problem lies in the fact that although some spells are easily found and added to your collection for future use. Others aren't. Some spell chests remain invisible until you cast a FIND IT spell others are triggered automatically and might reveal a secret door or magic portal; however, this might happen five or six rooms away and so you may never discover what happened.

Controlling the character is a little difficult since not only do you have to move him with the joystick you have to be ready to press the Commodore key to enter or leave a room, the 1 and 2 keys to scroll through the spell list while readying the fire button to cast the spell. This all becomes almost impossible when a mean-looking nasty is bearing down on you, particularly when you have to dig in the spell list for your sword. Indeed, many a hit point has been lost and spells wasted by pressing the 1 key too many times whilst in the panic of combat.

Finally, the game's excellent music isn't just to make the game sound nce, apparently it also forms a clue since the tune that is currently playing indicates how well you are doing. There are nine tunes stored in the game with the appropriate one being called up as required. To date I think I've heard the starting off tune, the "you're about to be clobbered" melody and the "tough buns, you've died again" finale.

Wizardry obviously misses out on the player interaction that adds to the magic of a D&D game but as a computer game it's really quite wonderful.

Wizardry obviously misses out on the player interaction that adds to the magic of a D&D game but as a computer game it's really quite wonderful.