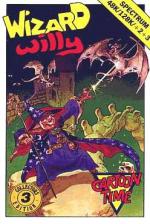 Fifi the fairy has gone and got caught and trapped in the Emperor's fortress (oh no!), and Wizard Willy is her only hope of escape (my hero!). You take on his role and must jump and climb through the enchanted forest, enter the dungeons and climb up the castle battlements to rescue her. On the way you'll have to collect ten of the magic eyes, and when yaw reach the end of the level the guardian skull has to be beaten!

Another cartoon adventure from Cartoon Time but compared to Olli and Lissa 3 this is dire. The sprites all (look like they've been badly cult out of a newspaper and stuck on the screen. They have a chunky border round the outside. The monochrome doesn't help things, and with a detailed background you can't tell what's going on half the time. You're supposedly meant to dodge the exploding traps that litter the path: I tried jumping over them, but no matter how well I did it I always exploded (t got a bit messy!).

There are things you can collect to improve Willy's performance, like a vanish spell to zap all monsters on screen, magic power to give extra lightning bolts and energy. These don't make the game any more playable though.

I was very disappointed with Wizard Willy, with plenty of better games around at the same price. This is a big let down.

I was very disappointed with Wizard Willy, with plenty of better games around at the same price.