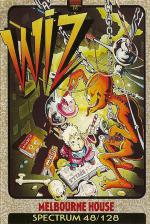 Worlds are about to collide. The wizards can prevent catastrophe, but consumed by their greed for magic they do nothing.

So you take it upon yourself to save humanity. As a novice wizard, you must elevate your power by reaching the Fifth Level and break the links that draw the worlds irrevocably closer.

Your shield against evil has been revoked by the Council Of Wizards, leaving you vulnerable to attacks from evil creatures - spiders, eyes, and stomping feet. Personal power is reduced by casting spells and by colliding with evil entities; it's restored with the passage of time, and by zapping evil beasts.

Runes selected in the correct order generate a spell. The Rune Spell destroys enemies and makes them leave behind a rune which must be picked up before it disappears. Some runes are found in the Dark Side, and to reach it the correct dark spell must be discovered. Side effects can occur if the rune sequence is incorrect or incomplete...

(In Read Spell mode all the spells you've learned can be read.)

'Wiz is really dire, and that's putting it politely. The graphics look like they've time-warped from an earlier period of Spectrum games, and it took me several minutes to realise the main character sprite is a wizard. The colour clash as meanies wobble around the screen has to be seen to be believed. Steer well clear of this.'

'Though Melbourne House still insist on distinctive expanded play areas, Wiz is much more involving than some of their recent releases. But despite the rapidly-scrolling and well-adorned play area I was very disappointed to see that the two worlds of dark and light have exactly the same structure and just differ in colour - it means lots of retracing your own tracks. So make sure you've got plenty of time to play Wiz, and a great long piece of paper to write all the spells on. All this fairly addictive game lacks is a title screen and some sound effects or a tune, which would add immensely to the atmosphere.'

'The poor graphics of Wiz exacerbate the lack of playability, because of the different perspectives; having characters seen from the side and the scenery from above looks unattractive, and the chunky scenery itself isn't very nice. Firing and moving at the same time is impossible - once you've lined yourself up with an evil being, you have to stop to cast a spell at it, by which time it's run off somewhere else. You might find Wiz passable if you've got bundles of patience, but I doubt anyone who's paid full price for this level of unplayability will have much patience with anything.'

You might find Wiz passable if you've got bundles of patience, but I doubt anyone who's paid full price for this level of unplayability will have much patience with anything.