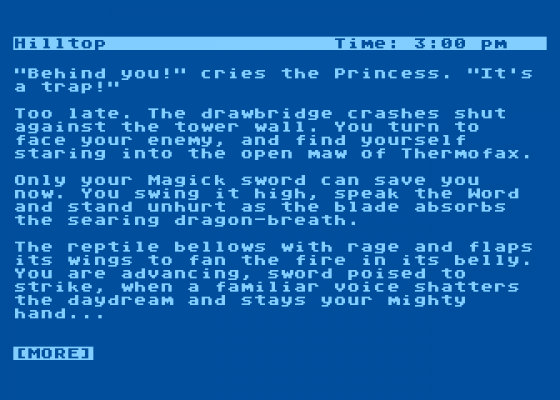 A new challenge from the kings of Adventure is good news for anyone who enjoys superb text adventures.

Wishbringer is the 16th adventure that Infocom have produced and follows such classics as the Zork Trilogy, Suspended and Hitch-hiker's Guide To The Galaxy.

In Wishbringer, you play the part of an office boy in the post office of a small town. You're sent by your nasty boss to deliver a strange letter to the Olde Magik Shoppe but instead you find yourself in a weird magical adventure where you must battle with the evil one who has taken over the town and its people. 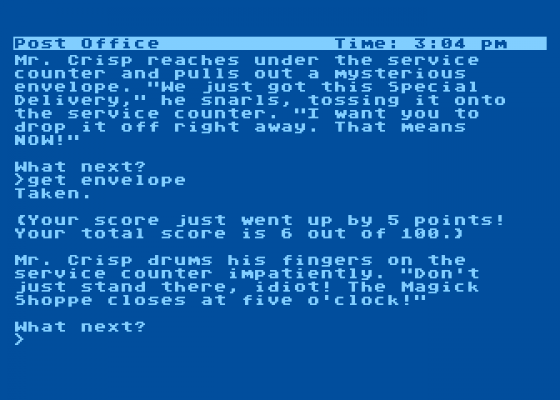 To help you, you are given a magical stone called Wishbringer which contains seven wishes which include "Freedom", "Light", "Darkness" and "Rain".

Wishbringer is also the way that Infocom give beginners a fighting chance of finishing the game. This is because using the stones wishes will get you out of sticky situations if your brain's logic cells pack in under the pressure. However, you have to use them wisely as they can be only used once.

Infocom aren't usually this generous but since Wishbringer is an Introductory Level game, they thought they'd give you a chance.

The game's packaging is, of course, superb and includes the sealed letter that you have to deliver to the Magic Shoppe, a map of the town and the Wishbringer stone itself.

Wishbringer is a superb game and well up to Infocom's usual high standard of text only adventures. If you haven't already been converted to the Infocom cause then buy this and you'll be hooked for life.

If you haven't already been converted to the Infocom cause then buy this and you'll be hooked for life.
Logout