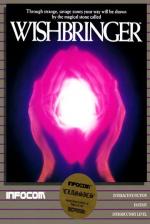 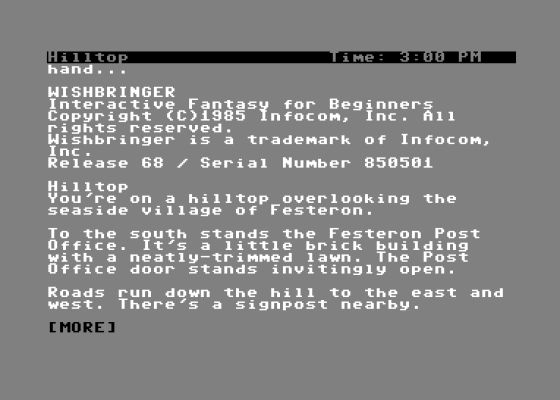 This is the latest offering from the Infocom label and, like all their other games, is disk-only. Where it differs from previous Infocom releases, however, is in the level of play. Wishbringer is aimed fairly and squarely at the inexperienced adventurer.

That's not to say, however, that veteran Wizards won't get a few thrills out of it. Ol' Whitey has been at it for a few nights now, and I'm afraid the bad news is that here is another expensive Infocom game that I've just got to have in my collection!

Wishbringer puts you in the role of a young postman in the sleepy seaside town of Festeron. Delivering a letter to the proprietress of the local Magicke Shoppe, you find yourself drawn into another dimension of magic and evil as you endeavour to rescue her cat from the Evil One. To aid you in your quest you have the Stone of Dreams, which enables you to cast seven spells in your defence. 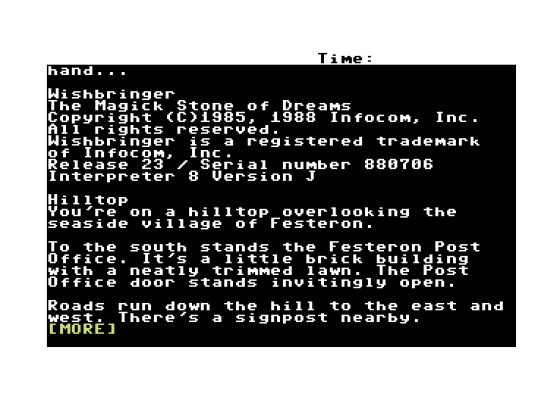 The spells are for rain, advice, flight, darkness, foresight, luck, and freedom from imprisonment. Most can only be used once, and all require that certain other conditions be met before they will work. For example, you can only cast the foresight spell if you're wearing glasses.

Interesting features of the program include a number of aids to the novice adventurer. For example, the program begins by flashing up What now? before each input prompt. After a while, the What now? prompt is omitted, and the program flashes up a little message to say that you won't be seeing it from then on, since it's assumed that you know when to enter commands.

Similarly, certain location descriptions are worded in such a way as to prompt the player to make the correct decisions. Locations that it is wise to enter are described as having doors that are 'invitingly' open, and so on. You might think that this would give the game away, but you needn't worry - the puzzles are still just as logical and, in one or two cases, lust as tricky as other Infocom adventures.

The trouble with Wishbringer (and with all recent Infocom games) is that there isn't much I can say about it! I can't tell you about the vocabulary problems because there aren't any. I can't tell you what sort of inputs it will accept, because I'd run out of space. I can't tell you the plot because it would spoil the fun and, besides, the text is so richly written that to try and condense it into a review would be meaningless.

As an example of interaction within the game, try this. You encounter a very unpleasant little poodle on your travels, and getting past it can be quite a problem. After the White Wizard had had his ego thoroughly damaged by the little monster, he typed 'Kick the poodle' in desperation. 'Are you kidding!?' replied the program, 'This poodle is MEAN!' And that's just one example of a whole host of responses that really lift this (and other Infocom games) into the league of all-time classics.

Wishbringer is yet another example of brilliant design and programming. It makes one wonder whether British companies, used to cassette-based games for so long, will ever catch up when we all move over to using disks. It's pricey, but even so it's still recommended to all in search of mystery and imagination.

It's pricey, but even so it's still recommended to all in search of mystery and imagination. 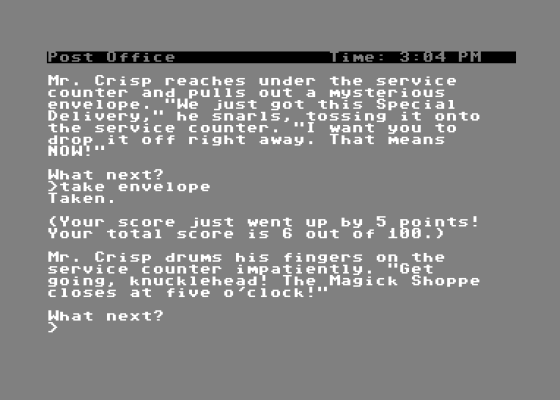