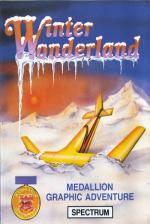 Hot on the heels, or should that be cold on the heels, of Apache Gold comes Incentive's other Medallion Graphic Adventure, Winter Wonderland. The scene-setting in this one is terrific, with you playing the part of an anthropologist who's plunged, in the manner of Harrison Ford (Yummy! Ed), into a tale of adventure and discovery. You receive a telegram from a Russian archaeologist friend working in Tibet who tells you to get your anthropological self over there at once. He's found evidence of a civilisation that's advanced at the same rate as the rest of mankind, but totally independent of it. On the last leg of your journey in the Himalayas, your Cessna aircraft is forced down by bad weather, and as you dive into the snow you're sure you get a glimpse in the distance of sunlight reflecting on glass. Can this be true in this deserted landscape? Well of course it can, otherwise there'd be no adventure.

You begin the game by the wreckage of your aircraft, with a fur coat and a pair of snowshoes. "Welcome to Winter Wonderland" the radio crackles, before expiring. Better wear the fur coat before you do the same. I made two moves east and died an instant death, falling through thin ice. Not my favourite way to start a game, as regular readers will know. I wandered elsewhere, found a gun, saw off a grizzly, then got myself stuck at the bottom of a rocky crevasse, having discovered a rope and ice-pick down there. I tried for ages to get out, but having gone SOUTH to get in I couldn't return NORTH, or go in any other direction, including UP or DOWN. I couldn't DIG, couldn't THROW ROPE, couldn't do anything. Eventually I ran through the directions again, and discovered the program recognised U but not UP. Bad programming, methinks.

Having sorted that out, I entered at last the world of Shangri-la, a strange world and not at all like you'd imagine. I mean to say, the Milton Walk Shopping Centre? Here were pet shops selling hamsters, florists selling roses, and the inevitable bookshop too. If only I'd had some money I would've had a good time. All I got instead was some kid continually throwing snowballs at me. I wouldn't mind, but I wasn't allowed to throw any back at him. And I thought it a bit much when he followed me into the health food shop and bombarded me there.