1st May 1987
Winter Wonderland
By Incentive
•
BBC Model B 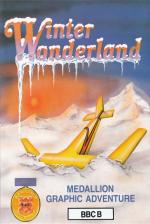 Winter Wonderland is the first adventure using the Graphic Adventure Creator to be released for the BBC Micro. I look forward to seeing other offerings of this standard.

The setting is an interesting one: You hear rumours of a civilisation which has developed in the Himalayas, quite separately from, but parallel to, our own. Off you rush to Lhasa, hire a Cessna and zoom away into the blue. The adventure commences after you have crash landed.

I must confess to being a text-only adventure fan, so once I had admired the picture of my crashed plane I was quite content to type in WORDS and start playing the adventure in that format,

I penetrated over 30 locations before I remembered to try PICTURES again, which demonstrates the holding power of the excellent text descriptions.

Scoring is based on percentage points for items collected and problems solved (about four percent an item), coupled with a move-counter. Thus, when you enter SCORE, you are given a percentage of the game achieved and the number of moves taken.

This will allow those who have completed the game to work out the minimum moves required, then see if they are right. To my mind this is a useful feature in any adventure.

The start is excellent: I have often stated that an easy beginning is essential to any adventure if newcomers are to be attracted, and the authors have provided a perfect example without being boring.

Judicious use of the command EXAMINE is needed to reveal some objects, and careful exploration is essential as you progress. The parser allows for multiple commands, though I confess I haven't used this facility much yet, since my explorations were done with this review in mind.

The locations I have visited so far are well thought out and well described. The puzzles I have solved have been logical, and the ones I have not yet solved have provided the right measure of frustration.

One clue that I feel it right to offer is this: Some actions can only beperformed after others have been correctly done In other words, it is possible to try the right thing andfail because you need to do something else first.

It isn't always because you are caught up in a chaining puzzle in the classic sense though - at least, not where cash and the bird man is concerned.

Winter Wonderland is a game I have no hesitation in recommending for newcomer and experienced adventurer alike. And beginners will be delighted to know that proper back-up help is on offer in the shape of a hint sheet.

Other BBC Model B Game Reviews By Mad Hatter

Winter Wonderland is a game I have no hesitation in recommending for newcomer and experienced adventurer alike.