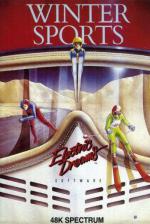 The game first loads in a menu from which these others are loaded and since each is loaded in from tape it's advisable to play them in order.

The three skiing events actually load in together as they are basically variations on the same theme.

All events are played on a split screen display with this generally being a view from behind your competitor and a plan view of the course. It's quite safe to ignore the players eye vew and concentrate on the plan view as you guide your skier in and out combinations of gates and posts in an attempt to reach the finishing line in the fastest time.

However, the opposite is true of the biathlon where you are supposed to be able to track your progress on a map of the course. This I found almost impossible and quite successfully ignored it.

The aim of the biathlon is quite simply to bash the left-right keys (if your Spectrum can take it) as quickly as possible to complete the 20km cross country course, pausing four times to shoot four almost impossible to miss, targets.

The ice hockey is probably the best event, particularly if played with two players since the computer always seems to get the face offs and scores a lot of points!

The game is played over three, five minute periods on a scrolling ice rink with a plan view of the whole rink, at the top of the screen, should you have time to look at it.

At times the action is a little slow and the players do smudge into a blob of green which makes things especially difficult for the player with the red team it is still a good competitive game to play.

Finally you can also hurtle down a bobsled run, plummet off a mountain in the ski jump and skate circles around your opponent in the speed skating.

I can't really fault the game's value for money since it will take you about two hours to get through all the events, or its graphics, but you're still left with the feeling that overall the game is "all right" but I doubt you'll load it in again.

I can't really fault the game's value for money... but you're still left with the feeling that overall the game is "all right". I doubt you'll load it in again.