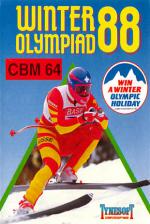 From the preliminary options screen, up to six competitors enter their names and select the nation they wish to represent. After choosing the events they wish to take part in, the action begins.

Ski jumping begins with the player at the top of a 90m run. Pressing the fire button starts the 'birdman' on his high-speed descent. At the end of the ramp, the player launches his skier into the air, and keeps his skis horizontal through flight. The skier is awarded points for distance covered and style.

Next is downhill ski-ing, where the player negotiates a 3km tree-lined route in the fastest possible time. Hazards come in the form of logs and rocky outcrops, which are jumped over.

The biathlon, a tortuous test of marksmanship and stamina follows. With a rifle slung over his shoulder, the player makes a long trek across snowy landscapes and stops at checkpoints to shoot at targets. There are three checkpoints in all, which the competitor visits within the fastest possible time.

Ski-ing makes its final appearance in the slalom event. Weaving left and right through the gates, the player must be sure to keep yellow flags on the right and brown flags on the left otherwise penalties are incurred and added on to the finishing time.

The final event places the player in a bullet-shaped bathtub inside a twisting 1.5km icy trench. This is the highly dangerous bob-sled, which involves guiding a sled as it rockets down the run at speeds in excess of 90mph. A steady hand is required, otherwise it turns over and the race is lost.

As a bonus, Tynesoft are running a competition for Olympiad players, the first prize being a trip to the 1988 Winter Olympics in Calgary, USA.

When playing Winter Olympiad, it immediately strikes you how incredibly similar the presentation of three of the events are to their Epyx counterparts. However, they aren't as playable, and I tired of them surprisingly quickly.

The slalom is very difficult, and the 3D isn't at all effective. It's a shame that the sprites and animation aren't up to the standard of the backdrops, because it would have added polish to an otherwise average sports simulation.

It's almost as if you're really there! David Vine, lots of cold white stuff, that famous tune, those jerky graphics... erk! Comparisons are bound to be made with Winter Games, but Winter Olympiad comes nowhere near the slick Epyx standard of nearly three years ago.

Winter Olympiad just goes to show that even decent graphics can't rescue a game if the animation and playability lack polish. Although there are plenty of events, none are particularly exciting, and it only takes a few plays for the action to become predictable. The Solid Gold compilation, complete with Winter Games and four other classics, is available at the same price...

Presentation 76%
Very good on-screen presentation, but the multi-load is slow and arduous.

Graphics 72%
The backdrops are quite good, but sprites and animation are generally poor.

Sound 68%
Plenty of tunes and jingles, but the emphasis is on quantity rather than quality.

Hookability 75%
Pretty straightforward, although the action is by no means thrilling.

Lastability 58%
None of the events offer much in the way of challenge, and there's no compulsion to return for repeated plays.