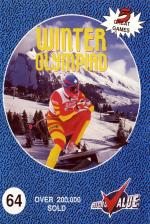 Originally, Winter Olympiad '88, this Tynesoft release was reviewed on the same spread as Galactic Games back in Issue 34. Both are heavily multi-load with five events which can be played singularly or all together. However, Tynesoft's events are a lot less bizarre. Event One is the Ski Jump which uses two screens, the first showing the skier descending the jump (press Fire to leap) and the second showing (hopefully) his safe landing with skis held together and dipping just before impact. It's familiar stuff, but dull to play with finicky control on the skis.

Event Two isn't much better, although graphically ambitious with your skier making his way through a 3D forest, jumping logs and dodging trees. Unfortunately it's too slow with overly sluggish controls. The Biathlon also have attractive graphics, with some nice animation on background screens as you ski past (although the flick-screen is a shame). By rhythmic waggling you finally get to the shooting range with a cursor bouncing up and down - press Fire at the right time to get a hit. Sadly the waggling doesn't work too well, and repeating the course four times makes it ultimately tedious. The Slalom is an improvement, a diagonally scrolling event with a very impressive start screen and reasonable playability. The final event is the Bob Sled, with you controlling the vehicle in question as it hurtles into the screen with an alarming tendency to overturn on the mildest corners.

In retrospect, the original mark of 53% seems amazing, with both reviewers pointing out the superiority of Epyx's Winter Games and the numbing lack of addiction in this graphically attractive, but shallow game.

Presentation screens are fire and loading seems to take forever (although Epyx games suffer from that too). Overall, distinctly snowbound.

There's a numbing lack of addiction in this graphically attractive, but shallow game. Plus loading seems to take forever.