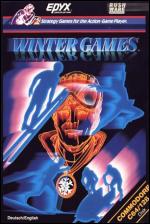 A fanfare sounds. It's the 1988 Winter Games at Calgary in Canada. And Epyx/US Gold have another gold winner.

The same high standard of graphics and accurate simulation which made Summer Games II such a smash, are all present again. Seven events are on offer:

Free Skating: two minutes in which you can give free range to your imagination and impress the judges with jumps and spins.

Speed Skating: two racers compete against each other in separate lanes.

Hot Dog Aerials: don't get in a flap as you flip through the air performing daredevil moves on skis.

Ski Jump: a deep breath and you're hurtling down the slope to take off into the air. Points are awarded for style and distance.

Bobsled: brave the track of solid ice and speeds of up to 90mph.

I suggest that anyone who wants to invest in this sort of game should but a very good joystick - and buy one very often.

These pictures are fantastic. I would buy this one and skip all the joystick-waggling events. I would do the skating, ski-jumping and hot-dogging. You can tell we like this because we want to take this one home!

The big pluses are superb graphics, good instructions - not guesswork or trial and error. I thoroughly enjoyed it. This is the one for us!

Superb graphics, good instructions - not guesswork or trial and error. I thoroughly enjoyed it.