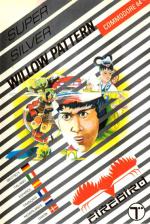 Willow Pattern Adventure is a translation of the famous Chinese legend of the Willow Pattern to the C64. For those ignorant to the ways of ancient Chinese culture, you'll probably feel even more so when you learn that you have probably seen a pictorial representation of this myth many a time. You know those pretty blue Chinese plates? Well, looking closely should leave you staring into the past and entangled in the story of two estranged lovers manacled to a life of woe (aaah so). The beautiful princess Koong-Shee is being forced to marry the merchant Ta Jin by her wilful father, Li Chi. Sadly she loves a clerk, Chang, who is well below her status and not fitting for the hand of a princess. His only hope is to force his way into the mandarin's palace and elope with the princess (eat your heart out Mills and Boon).

The trouble is the Mandarin's castle is heavily guarded by skilled fighters of all ranks and sizes (ooh). Being the penniless clerk that he is, Chang can't afford expensive deadly weapons such as those possessed by the palace guards. His only option is to rely upon stumbling across the odd stray weapon, often found lying around the palace. With a quick flick of the fire button, Chang can now destroy the sword-throwing Samurai warriors (yay).

The game takes place among the graceful gardens of the Mandarin, Li Chi. To rescue and elope with the princess, Chang must complete the many tasks set before him by collecting and using certain objects. The gardens themselves are laid out in the style of a maze, bordered by various flora and fauna. Chang is moved around the different screens with the aid of a joystick. Fire unleashes any weapons in his possession.

Positioned in places of maximum inconvenience are the Katana-wielding Samurai who are set on barring the way of any trespasser. If Chang gets within striking distance of said nasty, then a rather hefty sword comes flying his way. If he doesn't move a bit sharpish though, the life counter takes a turn for the worse. There are a few handy swords to be found about the maze and if one is collected it can be used to dispose of any vile Samurai.

In some choice spots around the garden are bridges that span one of the rivers. For some reason Chang must not cross the bridges, so he is forced to use the stepping stones beneath them. On top of each bridge three giants hang their arms over the side. This makes crossing the river awkward, so Chang has to jump between the stepping stones in time to avoid the dangling limbs. To complete the adventure it is necessary for Chang to gain a key to free the princess. The pair then have to hotfoot it back to a waiting boat with the princess' angry father hot in pursuit.

Chang is accompanied throughout his quest by a typically oriental musical score that speeds up when in possession of a sword.

Willow Pattern's most attractive feature is its graphics. They're very pretty and incredibly like Tom Minton's willow pattern design (he was the one who designed the original plates in 1785 so my Mum, who has a massive knowledge of antiques, informed me). The game has some nice problems, but lacks decent sound, variety and that something extra to make it a bit special. It also suffers from looking and playing like Sabre Wulf. Perhaps it would have been better priced at £2.50, as the £3.95 asking price seems a little too high. Nevertheless, it's fun to play and reasonably cheap.

Firebird have really improved the quality of their product with the launch of the Super Silver range. Willow Pattern is of a competent standard and easily matches some of its full priced rivals. The graphics are generally very good, but the sprites leave a bit to be desired. The music works well although the tunes aren't exactly amazing and they occasionally irritate. As this sort of game goes, Willow Pattern isn't too bad. It's very easy to get into and there's plenty to keep you busy. Overall, one of Firebird's better releases.

Firebird haven't produced anything of merit at budget prices on the 64 as yet and Willow Pattern is certainty a step in the right direction. The game isn't exactly original, but it's sufficiently playable and pleasant to look at. Well, the scenery's very nice but the sprites are quite crude. Music is used effectively during the game and I like the way that the tune speeds up when Chang is in possession of a sword. Willow Pattern isn't really my cup of tea, but it should appeal to fans of the genre - especially at the low price.

Lastability 56%
Some original gameplay elements but not enough to hold interest for any great length of time.

Value For Money 65%
Cheaper than your average arcade adventure but in this case you pay for what you get.

Overall 60%
Not the best of this type of game available but sufficiently cheap to merit a look.

Effective oriental music and some original gameplay elements but not enough to hold interest for any great length of time.