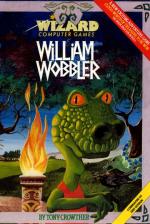 William Wobbler sees the long awaited return of Tony Crowther to the software scene and this is his first release under the Wizard Development label. Not, as a lot of people expected, yet another train game, William Wobbler is a full-blooded adventure featuring, as you'd expect, William Wobbler. Not liking the label 'arcade adventure'. Tony Crowther has dubbed his new creation a Cartoon Adventure.

The object of the game is for William to collect ten clues scattered about the vast system of caverns in which the adventure takes place. On the way to completing the adventure you'll need to pass several barriers and puzzles. Since a competition is involved, a competition disk is supplied with both cassette and disk versions on the basis that most people have some sort of access to a commodore disk drive, and the idea is that once you've finished the adventure a special file is saved to the competition disk and then sent off to Wizard Development. The prize is offered to the first person to complete it and though Wizard is leaving the actual nature of the price a mystery, it's said to be worth a £1,000 plus.

William Wobbler himself is a three sprite high figure with bouncing head and strange walk. Control over him is of the normal up/down right/left variety. Jumping is also available via the fire button. When you start to move around William's universe, the first problem encountered is that of flying objects which fly straight for your head and detach it from your neck if they hit it - this makes it game over, since you're only supplied with one life. Avoiding the flying obstacles is quite easy, all you need do is make William's head dip by pulling the joystick down, but some of the other solutions are obscure and unclear, needing a lot of thought.

You begin on the top level, an alien and futuristic landscape dotted with craters that are used as entrances to the main cave system. Collecting clues is no simple problem because there are a number of puzzles to he solved and barriers to be negotiated. As in any real adventure you have an inventory accessed by the I key. Unlike a proper adventure, when an object needs to be used it appears in William's hands and the process of using the object is automatic.

Your next problem is to get past the droids guarding entrances to the different caverns. One of the caverns has no droid and it's here you find a Glowing Orb. Once this item is included in your inventory, any droid you approach is destroyed as the Orb materialises in your hands. Various other things need to be collected and more often than not you need to be in possession of one particular item before you're allowed to collect another. The format is very similar to Mikro-Gen's Wally Week series.

The graphics are standard Commodore four colour multi-colour mode style and the scenery scrolls by as William remains positioned centrally. To travel between layers in the cave maze you are supplied with ropes or one-way drops. There are several ways to expire, each one carrying its own simple animation sequence of William's death. Once again, as in Gryphon, Crowther has included a test card. This time it's the type with vertical bars and the high-pitched tone. It's quite easy to get into, you just press the RESTORE key a couple of times.

After the disastrous 'release' of Gryphon in March, due to a bug cropping up during tape duplication, it seemed as if Tony Crowther had taken an early retirement. Now he's back and actually marketing his games under his co-owned label, Wizard Development. William Wobbler is the first such release and is, for all intent and purposes, a typical Crowther game, ie smooth scrolling, musically jolly and graphically big, bold and lacking in colour. The gameplay isn't anything outstanding, but at least it does prove absorbing for a short while. Thereafter things get a touch repetitive and monotonous and I didn't find myself that enthralled, despite the many pleasant touches. Nice test card though.

Loading the disk version I was a bit worried when a train appeared and the title LOCO IV appeared, until I realised it was all in jest. As I had expected, the scenario was packed with the usual Crowtheresque touches, very good sound and graphics, but I must admit to being a mite disappointed over the gameplay aspects. The total lack of information made achieving anything hard, especially since you're limited to one life. I realise that William Wobbler is a competition game and as such Wizard Development are loathe to give any information regarding the final solution, but a simple scenario description would have made the game much easier to play. Once you get over the hill of constantly losing lives and getting nowhere, William Wobbler becomes quite playable - even more so once you've found the disk for the save game facility. The adventure is complex and solving the puzzles is fun but I'm afraid that initial appeal, despite the instant addictiveness of Crowther's past efforts, is quite low and many a Crowther fan will have the right to feel disappointed.

The latest Crowther game has been eagerly awaited for quite some time now, but now it's arrived I must say that I'm pretty disappointed. The graphics are up to the usual Crowther standard with huge sprites and excellent scrolling routines, the trouble being that the game itself is rather dull. Once you've been round the scenery and found the same puzzles a few times, it does get a bit boring. Even so, there's no doubt that it'll sell well just on the strength of his previous releases.

Presentation 76% Some nice touches but little else.

Graphics 80% Big and nicely animated and detailed for their size, but not that well coloured.

Hookability 69% William's wobble is attractive enough to catch the eye.

Lastability 63% But there's more to a game than a good wobble.

Value For Money 60% Cassette version is quite expensive, despite the competition, but disk isn't exactly overpriced.

Overall 65% Not one of Crowther's best.

Not one of Crowther's best. Once you've found the same puzzles a few times, it does get a bit boring.