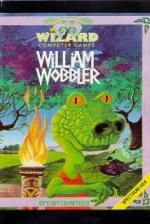 If you own a disc drive you could find yourself becoming very popular in the near future, and WiUiam Wobbler is the man to thank. It is all because Wizard are offering a £1000 prize for the first person to crack the secret of William's world and you need access to a disc drive to enter.

Who is William? Well he's a cartoon character dreamed up by programmer Toby Crowther, and he's called Wobbler because he wobbles a lot (William not Tony). As William walks his head jiggles around almost uncontrollably over his gangly body. Despite his ungainly appearance, William is a man with a mission because scattered around the tunnels beneath his world are clues which could lead to the superb prize.

He can enter the world through any of ten hollow tree trunks which each lead down to a passageway and each passageway is guarded by a droid. There is only one way that he can pass these guardians and that is to find the glowing orb which lies at the end of the only unguarded passage.

To find this passage he must jump down each hollow tree trunk in turn, avoiding a rather vicious lady with a large club and a blue bird which swoops up and down across the screen. There is only one way to escape a guarded passage and that is to go deeper underground where a long tunnel leads to a rope. A series of snakes and flying frogs lurk here but, with care, these don't provide much of a problem.

Once in possession of the orb, William can investigate all of the other passages, picking up objects which may be of use as he goes and collecting any clues that he finds. Most of the objects are useful but some are not, only trial and error will tell.

Keys lie around down here and they open locked doors which lead to yet more passages full of falling rocks and flying debris. Behind one of these doors lies the route to a floppy disc which can be placed into a subterranean disc drive allowing William to save his current collection of goodies and guarding against the loss of his single life.

This is a superb game with excellent graphics and lots of interesting problems to solve.

This is a superb game with excellent graphics and lots of interesting problems to solve.