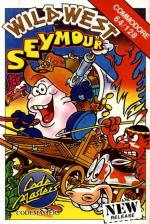 The potato's back! With the debate as to what the Codie's latest superstar actually is still raging after several months, Miles 'Spudgun' Guttery takes a look at his latest epic...

After a brief flirtation with saving the environment in Super Seymour and a short lived career moonlighting as a policeman in Sergeant Seymour - Robot Cop, Seymour's back where he belongs - in the movie biz! His latest proiect's a sprawling western, but (as usual) production has run into a plethora of technical hitches before it has even begun. Most of the problems are down to the devious tricks of the evil El Bandeeto who (for reasons best known to himself) is determined that the film never makes it to general release!

The fiendish villain has thrown the studio into uproar! No one knows where the script is, and worse still important equipment's been hidden or mislaid. To make matters worse the film crew have gone off to search for the missing items, leaving poor old Seymour to sort it out on his lonesome! One or two of the studio staff are still hanging around, such as Claire the receptionist and Pete the camera-man - they seem to have problems of their own, but help them out and they give you a useful object or a clue in return. Having rectified the turmoil at HQ, it's off to the States to begin shooting (the movie, silly).

Act two sees the hapless vegetable rushing to catch his train. Unfortunately he has no ticket, he's lost his wallet and the train is almost due to leave.

On to act three. The evil El Bandeeto's sabotaged the train (What a rascal he is, eh?), leaving Seymour stranded in the desert! Cue more puzzle solving and careful exploration of scenery.

After getting the train back up and running, our hero finally makes it to the final section - the film shoot!

When Seymour first appeared it seemed he was to be Dizzy's successor as Codie's standard bearer. After a couple of simplistic but playable arcade outings and an inferior Dizzy-esque arcade adventure, his credentials aren't particularly overwhelming. Whereas Dizzy was a little bland and colourless, the games he starred in were full of character! Seymour, on the other hand, is just plain annoying! His world is graphically dull, and to add insult to injury his latest starring roll is a blatant Spectrum port that makes no attempt to utilise the superior colour capabilities of the C64. Unlike Codies' earlier arcade outings, Wild West Seymour's made up of four standalone sections accessible by a rather spiffy password system: Having completed a section you don't have to go through the rigmarole of solving the same old puzzles every time. In this respect, the game borrows from the recent Crystal Kingdom Dizzy. The essential difference is where each of Crystal Kingdom Dizzy's levels is a respectable game in its own right, the sections in Wild West Seymour are tiny, only ten to fifteen screens long) This means they're laughably easy, making Wild West Seymour a complete non-starter in the lastability stakes...

WWS was initially sold as part of a compilation and, as such, was okay to while away an hour. As a release in its own right, it really is a disappointment. I usually find this style of game highly addictive and very rewarding to complete, but the only feeling I had on completing WWS was immense relief that I wouldn't have to play it again! Strictly B-movie stuff.

You'd think by now these Codie puzzle/arcade games would look different to the Spectrum versions, but low-and-behold, they don't. Wild West Seymour is no exception - the graphics are stale and watery, especially the main sprite, and 'attention to detail' must've been erased from the menu. The puzzles are quite tame, each needing little thought, and after a few plays it's all sorted.

The majority of time is spent judging Seymour's leaps! If only he could change direction in mid-air, I wouldn't have swore half as much! There's a remarkable resemblance to a certain egg-shaped character, but the yolk's adventures are far better in content.

Seymour's home ground should be on a compilation, but in the vast universe that is the C64 market, as a standalone game it'll struggle to gain friends.

Hmm... breaking the game into bite-size pieces accessed through level codes is a neat idea, but apart from that it's just more of the same.

Dizzy/Seymour arcade adventures have always been pretty similar, but up 'till now they've always taken the genre one (small) step forward. Prince Of The Yolk Folk was as large as it could possibly be, so the Codies wisely concentrated on their new level system and better graphics with Crystal Kingdom. Wild West Seymour is a step backwards - a shameless Speccy port, it runs almost as slowly as the early Dizzy outings, and the problems... solve one, you've solved 'em all!

If Codies arcade adventures are to excite again, more attention must be paid to the design. Let's have a more involved manipulation system, one that allows you to use objects in your inventory on each other. Let's have more complex problems, not just bog-standard ones. Above all, let's have a bit more depth. Part of Dizzy Seymour's charm was its simplicity, but having been done to death it's begining to grate. Maybe it's time for a change of outlook.

Hookability 70%
It's initially quite playable enough

Lastability 30%
Please roll on Dizzy VIII, all is forgiven!

Seymour's home ground should be on a compilation, but in the vast universe that is the C64 market, as a standalone game it'll struggle to gain friends.