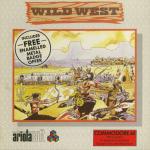 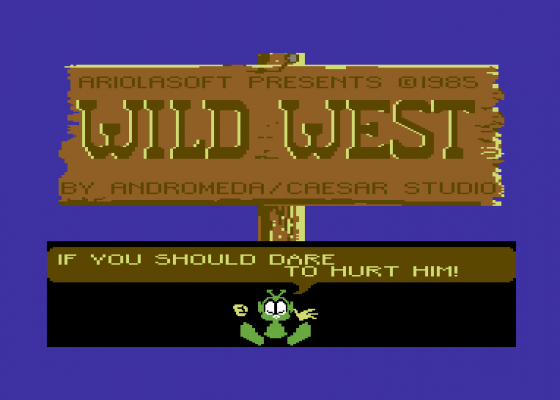 When is an adventure not an adventure? Wild West claims to be one but it is like nothing I have met before. The text is fixed and it is a case of following a fixed sequence of events or your mission will fail.

To help you make your choices there are three sprites who each offer a course of action. You simply select the sprite whose advise you want to follow and hope that your choice is correct.

The object of the game is to recapture Fort Snake from Big Nose Bill and his gang, taking in the rodeo on the way, being kind to the indians and conserving your energy for the big battle. 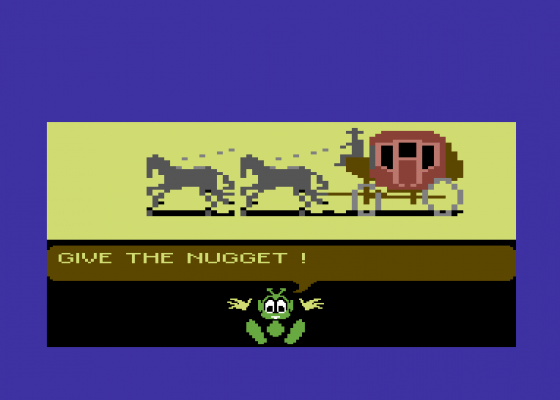 The game is in three parts and if success is to be achieved in the later parts you must complete the earlier ones and note the password you are given. If you want to see all the parts you can load them at any time but you will not be able to complete them.

The game is infuriating to play because you get very little indication of how well you are doing and it all becomes a very hit-and-miss affair. For example, at the beginning of the game you soon become aware that a stagecoach soon puts in an appearance but to catch it you have to perform some unusual feats to get the gold to pay your fare and then reach the correct boarding point.

By far the best feature of the game is the animation of the little sprite creatures who noiselessly mouth the words of their advice while moving their hands around expressively. It's a pity that the rest of the game does not live up to this standard.

The game is yet another Hungarian production from Andromeda and their distinctive graphic style shows through but the haphazard gameplay spoils that is essentially a good idea.

The distinctive animation is really great... but the haphazard gameplay spoils the game.