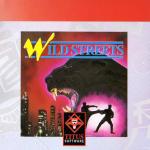 New York, a few years from now. The city has become divided; half is covered in mansions, the other half is in ruins. The mansions are owned by the drug barons and it is they who control the city. Even Woody Allen is having second thoughts about making any more films there.

The police fight back, with a force headed by John Stevens. Unfortunately, just as the police are making headway, John is kidnapped by the druggies and it's your job to find him and bring him home. It's a bit like Escape From New York but without the pyrotechnics.

You are James Taylor, a man with a big right hand and not afraid to use it. Er, yes... Anyway, armed only with your trusty 357 Magnum and partnered by Black Virgin, your pet panther, you set off to teach the city to 'just say no'. Virgin will attack in your defence but not until you're nearly dead.

The game is a glorified beat-'em-up, the 'highlight' (such as it is) being the panther. The animation is laughable and the fighting, well, what can I say in its defence? James may have eight moves but it's easier to keep one finger on Fire, move relentlessly to the right and just punch your way through the screens.

After seven sections, you find John Stevens and then you have to find your way back without him dying on you. Hardly taxing, and hardly pushing back the frontiers of gaming. Wild Streets? More like Coronation Street.