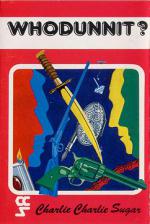 Who-Dunnit? requires no clues to guess what the game is about! You have to lead the investigation into the brutal murder of Professor Carpenter the famous Oxbridge scientist, who was murdered in Oxbridge at midday. There are six suspects with names whose initials conveniently fall out as AA, BB, CC, DD, EE and FF, each of a different profession. All the suspects were seen and questioned in separate towns at varying distances from Oxbridge and at different times of the day. You must work out who has and who hasn't got an alibi. All you know is one of the two murder weapons and one of the two missing valuable objects. To make a successful accusation you must get several facts correct, the murderer's name, his profession and the identity of the second murder weapon and that of the second missing valuable object.

Who-Dunnit? may be played by between one and four players. At the start, a two-screen form is provided which may be copied down on paper or printed out if a printer is attached. To play successfully this form should be used. The game takes the form of single questions and answered facts. To start you off a few random facts are given about the suspects, which the players fill in on their forms. Thus one might discover, for instance, that CC is a clergyman and the clergyman is bow-legged. Gradually, a picture of each suspect can be built up.

Play continues along the lines of asking each player a quiz question which generally take the form of simple intelligence test questions. If the question is answered correctly, the player may ask a fact of one of the suspects. Eligible questions include the first and second weapon found on him, the first and second valuable object, town where he was seen, time of alibi, his fastest means of transport, a personal fact about him. Under the heading of personal fact come several important items which may help identify his profession, means of transport and its speed. After this, the player is allowed to make an accusation if desired. Between each player's turn there is a free fact given out about one of the suspects or the distance of a town from Oxbridge.

Thus, if FF lives in Nether Denton which is 120 miles from the scene of the crime; was seen at 5pm and owns a bicycle with a speed of 10mph, obviously he couldn't have committed the crime.

If you want a quicker game, the quiz questions may be omitted.

This is a fairly simple version of this type of game, but difficult enough to be intriguing. It is possible the only one of its type for the Spectrum, so it's got a certain amount of appeal value.

An early irritation is the need to put Caps Lock on... that shouldn't be necessary, even in a Basic program. Being in Basic also means that you keep having to press ENTER instead of having the program read your keypress directly, which does get annoying when you are playing for a while. Apart from these quibbles, and considering its price. Who-Dunnit? is quite amusing and involving to play. It's not going to appeal to a lot of computer gamers, I would think, but it's rather a good family game, especially where there are younger children involved. Certainly a group activity anyway.

This works on the principle of shaking up a few random facts and shuffling them among the suspects, so in principle each game is different. For one or two goes it manages to be fairly playable, but the appeal soon fades since it is only a question of constant elimination of the facts. The intelligence test questions also lose their value after you've seen the same idea repeated a few times.

Quite amusing and involving to play. It's not going to appeal to a lot of computer gamers but it's rather a good family game, especially where there are younger children involved.