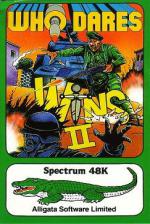 Now at last Spectrum owners can follow their Amstrad and C64 comrades into battle as they fight their way through seven outposts of combat action.

Armed with a sub-machine gun and a handful of grenades you have to fight your way through enemy troops, mortars, tanks and planes to get to the next outpost. This is in fact a rather decrepid-looking hut that doesn't appear to be worth all the trouble.

The enemy hurl grenades and bullets at you at a pheonmenal rate and it takes all your energies just to keep out of trouble!

In fact the best strategy is to ignore these obvious dangers and simply blast your way through. This is surprisingly effective as even the enemy hidden in trenches leap out of them and run away as soon as they see you coming.

Extra bonus points can be scored by saving one of your comrades from a firing squad - but don't expect too much thanks as you'll have to put up with a cheery wave. Then, he beams up and leaves you on your own.

Luckily, someone, somewhere is thinking of you as extra boxes of grenades are dropped by parachute and can be collected by you.

Eventually you reach the outpost only to be met by a stream of soldiers that have been waiting for you but a few well slung grenades soon finish them off and then it's on to the next outpost.

Scattered throughout the game are a number of jeeps and dingies that make a run for it as soon as they see you, hitting them can earn you a useful bonus, particularly when accumulating 10,000 points gets you an extra life.

The pre-production copy that I played had one serious bug and that was it gave me unlimited lives. This allowed me to see the entire game in the equivalent of about 87 games.

I'm delighted to say that the Spectrum conversion retains all of the gameplay of the C64 original. A feat in itself.

The Spectrum conversion retains all of the gameplay of the C64 original. A feat in itself.