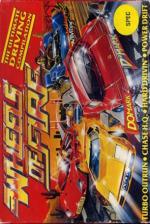 If you don't quickly TYRE of racing games, this compilation could DRIVE you crazy! WHEELS OF FIRE is a WHEELY comprehensive collection from Ocean, Domark, Activision and US Gold in which the star is probably TURBO OUTRUN - sequel to the classic Sega coin-op. This time, you get 16 stages, choice of auto or manual gearshift, more opposition and a turbo boost option.

Fairly decent is CHASE HQ; it's visually similar to Turbo Outrun, but has an action element as you attempt to overhaul motorised crooks. Next along is POWER DRIFT, an extremely fast and frantic kart-racing sim with 27 tracks. The big gimmick here is that the track bobs UP and DOWN in an extremely nauseating manner. Trailing a poor fourth is HARD DRIVING, which is equally nauseating but for different reasons. This solid vector graphic 3-D sim is so slow, it looks like a graphic adventure game. This one wasn't released - it escaped, and the ironic bit is that this is Domark's contribution to the package. You really have to be a driving maniac to go for this compilation, especially since Hard Driving drags down the overall mark so much.

You really have to be a driving maniac to go for this compilation, especially since Hard Drivin' drags down the overall mark so much.
Logout