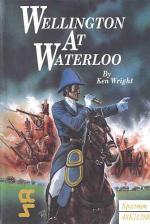 Waterloo is... a) A large railway station serving the south and south west? b)The title of Abba's Eurovision Song Contest winner and their first big hit? c) A small village in Belgium where Wellington defeated Napoleon for the last time and put an end to his imperial ambitions?

If you answered c), then you got A half right - 'cos as you will discover from the historical notes of CCS's latest wargame, the British view of history suffers from being somewhat Anglocentric. Wellington had more than a little help in beating the wily Corsican from the Dutch and the Prussians, plus assorted other allies. In fact, the Germans believe that Blucher won the battle of Waterloo.

Anyway, CCS's Wellington At Waterloo gives you the chance to play Wellington (or Blucher, if you're that way inclined) and have a bash at fighting Napoleon yourself. The computer is Napoleon, so you have your work cut out for you.

Ken Wright has written a number of games for CCS now, and, almost without exception, they have been fine quality products. Waterloo is no different - in fact, it is so similar in construction to some of his other games for CCS that it seems that he must have written a basic battle authoring system, to which he has added different historical details to make new battles. Nothing wrong with that - it's how most games writers work, if they plan on writing more than one program.

For those who haven't played one of Ken's efforts before, here's a brief run down. The screen shows you part of a map of the terrain around the village of Waterloo. You can scroll the screen around a total area which is roughly four screens wide by three beep. On this map are arrayed the French and Allied armies (except the Prussians, who turn up later). Each unit is represented by a square 'counter', with a national marking on it and an indication of which division it belongs to and whether it is infantry, cavalry or artillery.

To move, you use the menu to access a particular division. Then you move the cursor to where you want each of the units of that division to go and they should follow. I say should, because sometimes they have a habit of taking odd routes to get where you've told them to go, hence taking a bit longer than you might have planned for. This could be either a rough edge in the program, or a deliberate attempt to simulate the 'fog of war' and Murphy's law.

Each unit has a certain number of men in it, and a certain morale level. The more men and the better the morale, the better it will fight. Allow a unit to lose too many troops in fighting, or to become demoralised, and you run the risk of it routing from the field of battle.

Unfortunately, Ken Wright doesn't make it easy for you 'cos he's included hidden movement in the game. After the initial view of the battlefield, all the French units which are more than a certain distance away from one of your units disappear. You can get a vague idea of where they are from the location of their headquarters' flags, but you really don't know how many units they have or where exactly they are on the map. Neat - and vicious.

As usual, I lost the first game I played. Overconfident as ever, I basically charged the French army head on. I was enjoying my little successes, right up until the point the computer (rather smugly, I thought) told me I had lost. Oh well, it wasn't the end of the war - I just loaded up again. And took a little longer to lose. Eventually I'm going to beat this damn Corsican computer.

An excellent game, and one which should keep the wargames fans interested for some time. A bit difficult for the uninitiated to pick up - but well worth plugging away at.

An excellent game, and one which should keep the wargames' fans interested for some time. A bit difficult for the uninitiated to pick up - but well worth plugging away at.