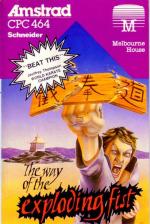 Martial Arts games have been all the rage in the arcades for quite a while. This offering from Melbourne on the Amstrad and Spectrum is the first good one I've seen.

The game takes the usual format with two oriental martial artists facing each other. There are options for either a two player game or a single player game in which case the computer plays the opponent. The level of the computer opponent may be selected from novice to expert so the game can be challenging for a long time.

It took me a while to master the basic Kicks and Punches and once these are done there are a few flashy moves to be learnt such as the roundhouse and a rather nice back kick. With all these under your belt it shouldn't take long to defeat the first opponent. This is done by successfully striking a blow. If the blow was struck well, then a full point is awarded. If the blow landed but wasn't very well done then only half a point is given. These points are represented by the Yin-Yan symbol. First one to get two complete Yin's wins (!).

The more matches you win, the higher your rating goes but the level of the computer goes up as well. After one weekend playing this, the matches now look rather spectacular and they really get the adrenalin flowing.

Overall, an excellent game on both Micros and one I can highly recommend.

An excellent game and one I can highly recommend.