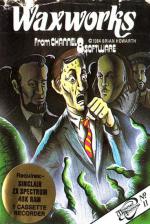 Mixed graphics/text adventure from Channel 8's extended range. I had high hopes for this one, being a devotee of Vincent Price, and Waxworks being another of those 'obvious theme that do-one's done yet' ideas. In the event, I really couldn't work up the energy to bulldoze through it.

Channel 8's graphics are, at least, an integral part of the game, unlike many other adventures where they're simply a frill. So much so that there's actually very little text at all, and you have to rely on your interpretation of the rather shaky line drawings to decide what action to take. This is really adding too much of an extra burden to the whole 'guess the verb' format.

The game doesn't automatically tell you what portable objects are lying around; it doesn't even show them on the graphic display. No, you have to try and pick them up just to find out if they exist. The result may appeal to people who really enjoy Herculean tasks like filling in income tax forms, but it didn't exactly speak to the depth of my own soul.

A long, hard slog and not cheap at that.

I had high hopes for this one, being a devotee of Vincent Price... but, in the event, I really couldn't work up the energy to bulldoze through it.