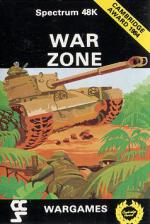 This is an impressive game, certainly the best wargame that C. C. S. have released so far. Even my girlfriend liked it, so it must be good! Warzone is a straight battle between the blue and red armies (the computer controlling the red armies of course) over a sectored map measuring thirty units square. The player has a choice of infantry, artillery and tank units and can choose up to one hundred and fifty units in total - which is matched by the computer's side. The computer generates a new landscape for each game and deploys the units automatically.

The physical features of the map are a little on the simple side, but incorporate some nice touches such as giving longer range when firing from a hilltop. The map does not scroll, but is selected by sector - this causes some problems, as you cannot look at a sector where you do not have pieces (I suppose this may echo real-life military intelligence, but it can be very frustrating) and you also cannot fire from one sector into another, which is definitely not realistic. The program is all machine code, and responds fast, though I greatly prefer the cursor selection type of piece movement to the 'J3 to H6' type of input as found in Warzone.

The program is all machine code, and responds fast, though I greatly prefer the cursor selection type of piece movement to the 'J3 to H6' type of input as found here.